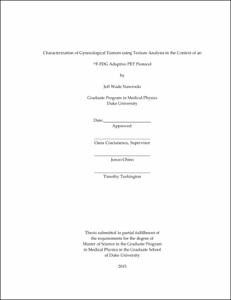 In radiation oncology, 18F-FDG Positron Emission Tomography (PET) is used for determining metabolic activity of cancers as well as delineating gross tumor volumes (GTV) for treatment planning. More recently, PET is being utilized for adaptive therapies for gynecological malignancies in which tumor response may be estimated and treatments adjusted during the course of radiation. In addition to treatment assessment, 18F-FDG PET has become a tool in the prediction of tumor response because of the derived Standard Uptake Value (SUV), a measure of the metabolic activity of a tumor. In this study, we seek to establish texture analysis as complimentary to SUV for predicting tumor response as well as understanding temporal changes during treatment in gynecological cancers. An additional experiment was performed studying the variability of texture features from baseline and intra-treatment PET scans due to reconstruction parameters in order to identify features that show statistically significant changes during treatment and that are independent of reconstruction parameters.

In this IRB approved clinical research study, 29 women with node positive gynecological malignancies visible on PET including cervical, endometrial, vulvar, and vaginal cancers are treated with radiation therapy. Prescribed dose varied between 45-50.4Gy, with a 55-70Gy boost to the PET positive nodes. A baseline, intra-treatment (between 30-36Gy), and post-treatment PET-CT were obtained with tumor response determined by a physician according to post-treatment RECIST. All volumes were re-contoured on the intra-treatment PET-CT. Primary GTVs were segmented both with the 40% SUVmax threshold method and a validated gradient-based contouring tool, PET Edge (MIM Software Inc., Cleveland, OH). A MATLAB Graphical User Interface (GUI) called Duke FIRE (Functional Imaging Research Environment) was developed for this study in order to calculate four mathematical algorithms representing the spatial distribution of pixels in an image: gray level co-occurrence matrix (GLCM), gray level run length matrix (GLRLM), gray level size zone matrix (GLSZM), and the neighborhood gray level difference matrix (NGLDM). Features representing characteristics of the image are derived from these texture matrices: 12 local features from the GLCM, 11 regional features from the GLRLM, 11 regional features from the GLSZM, and 5 local features from the NGLDM. Additionally, 6 global SUV histogram features including SUVmean, SUVmedian, SUVmax, skewness, kurtosis, and variance as well as metabolic volume (MV) and total lesion glycolysis (TLG) are extracted. The prognostic power of each baseline feature derived from both gradient-based and threshold segmentation methods was determined using the Wilcoxon rank-sum test. Receiver operating characteristic (ROC) curves were calculated to understand the sensitivity and specificity of baseline texture features compared to SUV metrics. Changes in features from baseline to intra-treatment PET-CT were determined using the Wilcoxon signed-rank test. A subset of 7 patient baseline and intra-treatment raw PET data was reconstructed 6 times using a TrueX+TOF algorithm on a Siemens Biograph mCT with varying iterations and Gaussian filter widths. Texture features were derived from the GTV as before. Texture features per patient were normalized to the respective clinical baseline value in order to limit variability to reconstruction parameters. Mean percent ranges of each feature at baseline and intra-treatment were determined and the change in features was compared using the Wilcoxon signed-rank test.

Of the 29 patients, there were 16 complete responders, 7 partial responders, and 6 non-responders. Comparing CR/PR vs. NR for the gradient-based GTVs, 7 texture values had a p < 0.05. The threshold GTVs yielded 4 texture features with p < 0.05. ROC and logistic regression was performed and texture features from both PET Edge and thresholding yielding a higher area under the curve (AUC) than SUV metrics. Features derived from PET Edge GTVs also showed higher AUCs than the threshold GTVs. From baseline to intra-treatment, 16 texture features changed with p < 0.05. Texture analysis of PET imaged gynecological tumors is considerably more powerful than SUV in early prognosis of tumor response, especially when using a gradient based method.

We then took the 16 texture features showing significant changes (p < 0.05) between baseline and intra-treatment PET scans in 29 patients and tested these against the subset of reconstructed features to determine if these changes were dependent upon the method in which the scans were reconstructed. A total of 13 features (including entropy, zone non-uniformity, and complexity) were found to be consistently different even when subjected to different means of reconstruction, however 3 of the 16 (inverse variance, run percentage, and zone percentage) were found to be dependent upon these reconstruction parameters. Texture features such as entropy, zone non-uniformity, and complexity are excellent candidates for future investigations of changes in texture analysis during radiation therapy of gynecological cancers. Caution should be taken with inverse variance, run percentage, and zone percentage due to their dependence upon reconstruction parameters.

This comprehensive work characterizes gynecological cancers using texture analysis in order to identify texture features that may be used for predicting tumor response as well as reflecting changes during treatment. It is the first study to our knowledge that utilizes all 4 texture matrices (GLCM, GLRLM, GLSZM, and NGLDM) and found 7 statistically significant features classifying responding and non-responding gynecological tumors: energy, entropy, max probability, zone gray level non uniformity, zone size non uniformity, contrast (NGLDM), and complexity. A novel method was implemented extending the NGLDM and its respective features to 3D space for this study. It is also the first study concluding that a semi-automatic gradient-based segmentation method results in more, stronger predictors than using a 40% SUVmax threshold method. Finally, this is the first study to examine variability of texture features with reconstruction parameters and to identify texture features as reliable and independent of reconstruction. In conclusion, texture analysis is a promising method of characterizing tumors visible on PET and should be considered for future studies.