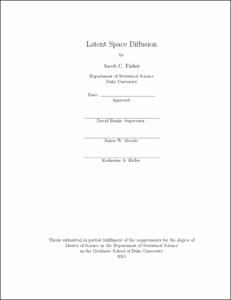 Social networks represent two different facets of social life: (1) stable paths for diffusion, or the spread of something through a connected population, and (2) random draws from an underlying social space, which indicate the relative positions of the people in the network to one another. The dual nature of networks creates a challenge - if the observed network ties are a single random draw, is it realistic to expect that diffusion only follows the observed network ties? This study takes a first step towards integrating these two perspectives by introducing a social space diffusion model. In the model, network ties indicate positions in social space, and diffusion occurs proportionally to distance in social space. Practically, the simulation occurs in two parts: positions are estimated using a latent space model, and then the predicted probabilities of a tie from that model - representing the distances in social space - or a series of networks drawn from those probabilities - representing routine churn in the network - are used as weights in a weighted averaging framework. Using a school friendship network, I show that the model is more consistent and, when probabilities are used, the model converges faster than diffusion following only the observed network ties.