Cuban-Russian Relations in the 21st Century: Oil and Geopolitics 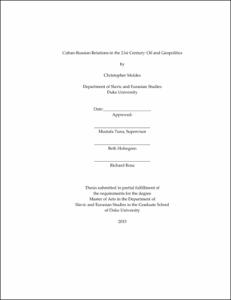 This thesis examines how the recent discovery of massive oil reserves off the coast of Cuba has driven a resurgence of Cuban-Russian relations in the 21st century. The first chapter demonstrates how the Russian government came to conceptualize the export of hydrocarbons as integral to the nation's development. It also examines the internal situation in Cuba after the fall of the Soviet Union to explain what initiated shifts in domestic policy that allowed for greater external investment. The second chapter discusses the effect of the discovery of these oil reserves, and how the Russians and the Cubans have come together over this issue against the backdrop of larger anti-American tendencies in Latin America. The first chapter relies more on secondary analyses of trends in both nations to help familiarize the reader with key concepts, such as the idea of Russia's energy weapon and Cuba's impetus for change. The second chapter heavily uses newspaper articles and speeches to demonstrate the visible shift in Russian attitude towards Cuba.

This thesis shows that the oil reserves have stimulated both countries to work closely together, though each has their respective reasons.