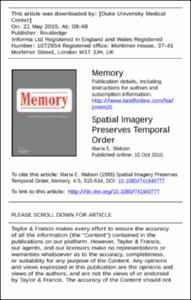 View / Download
312.5 Kb
Date
Authors
Rubin, David C
Watson, ME
Repository Usage Stats
267
views
297
downloads
Abstract
Line drawings were presented in either a spatial or a nonspatial format. Subjects recalled each of four sets of 24 items in serial order. Amount recalled in the correct serial order and sequencing errors were scored. In Experiment 1 items appeared either in consecutive locations of a matrix or in one central location. Subjects who saw the items in different locations made fewer sequencing errors than those who saw each item in a central location, but serial recall levels for these two conditions did not differ. When items appeared in nonconsecutive locations in Experiment 2, the advantage of the spatial presentation on sequencing errors disappeared. Experiment 3 included conditions in which both the consecutive and nonconsecutive spatial formats were paired with retrieval cues that either did or did not indicate the sequence of locations in which the items had appeared. Spatial imagery aided sequencing when, and only when, the order of locations in which the stimuli appeared could be reconstructed at retrieval.
Type
Journal article
Subject
Cognition
Humans
Memory
Mental Recall
Serial Learning
Space Perception
Time Perception
Permalink
https://hdl.handle.net/10161/10158
Published Version (Please cite this version)
10.1080/741940777
Publication Info
Rubin, David C; & Watson, ME (1996). Spatial imagery preserves temporal order. Memory, 4(5). pp. 515-534. 10.1080/741940777. Retrieved from https://hdl.handle.net/10161/10158.
This is constructed from limited available data and may be imprecise. To cite this article, please review & use the official citation provided by the journal.
Collections
More Info
Show full item record