Core and Shell Song Systems Unique to the Parrot Brain. 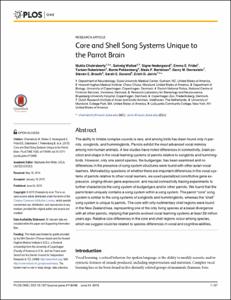 View / Download
70.1 Mb
Date
Authors
Chakraborty, M
Walløe, S
Nedergaard, S
Fridel, EE
Dabelsteen, T
Pakkenberg, B
Bertelsen, MF
Dorrestein, GM
Brauth, SE
Durand, SE
Jarvis, ED
Show More
(11 total)
Repository Usage Stats
372
views
201
downloads
Abstract
The ability to imitate complex sounds is rare, and among birds has been found only in parrots, songbirds, and hummingbirds. Parrots exhibit the most advanced vocal mimicry among non-human animals. A few studies have noted differences in connectivity, brain position and shape in the vocal learning systems of parrots relative to songbirds and hummingbirds. However, only one parrot species, the budgerigar, has been examined and no differences in the presence of song system structures were found with other avian vocal learners. Motivated by questions of whether there are important differences in the vocal systems of parrots relative to other vocal learners, we used specialized constitutive gene expression, singing-driven gene expression, and neural connectivity tracing experiments to further characterize the song system of budgerigars and/or other parrots. We found that the parrot brain uniquely contains a song system within a song system. The parrot "core" song system is similar to the song systems of songbirds and hummingbirds, whereas the "shell" song system is unique to parrots. The core with only rudimentary shell regions were found in the New Zealand kea, representing one of the only living species at a basal divergence with all other parrots, implying that parrots evolved vocal learning systems at least 29 million years ago. Relative size differences in the core and shell regions occur among species, which we suggest could be related to species differences in vocal and cognitive abilities.
Type
Journal article
Subject
Animals
Brain
Humans
Learning
Music
New Zealand
Parrots
Vocalization, Animal
Permalink
https://hdl.handle.net/10161/10234
Published Version (Please cite this version)
10.1371/journal.pone.0118496
Publication Info
Chakraborty, M; Walløe, S; Nedergaard, S; Fridel, EE; Dabelsteen, T; Pakkenberg, B; ... Jarvis, ED (2015). Core and Shell Song Systems Unique to the Parrot Brain. PLoS One, 10(6). pp. e0118496. 10.1371/journal.pone.0118496. Retrieved from https://hdl.handle.net/10161/10234.
This is constructed from limited available data and may be imprecise. To cite this article, please review & use the official citation provided by the journal.
Collections
More Info
Show full item record