The Impact of Drought on Electricity Supply in North Carolina 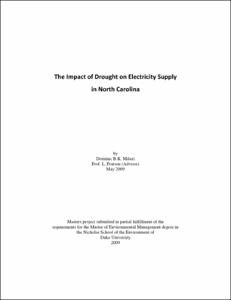 View / Download
2.5 Mb
Date
Author
Milazi, Dominic
Advisor
Pratson, Lincoln
Repository Usage Stats
729
views
2,005
downloads
Abstract
North Carolina is located within the Southeastern region of The United States, an area which has experienced varying degrees of drought over the last two decades. Water withdrawal and consumption are integral and unavoidable components of the electricity generation process whenever it is fueled by non-renewable sources of primary energy. It follows from these two statements, that North Carolina - which largely depends on base-load coal and nuclear thermoelectric power generation - will be vulnerable to electricity supply disruptions in times of severe drought. In this report, an attempt is made to quantify the financial or economic impact on privately-owned utility companies as well as the state economy. The report will cover various issues en-route to quantifying the impact of drought including: identifying areas in the state historically prone to drought, locations of major power plants in relation to these drier areas, electricity generation costs of different powers plants within the state as well as changes in aggregate generation costs under different scenarios when countering the adverse effects of drought. Major findings include that roughly 5000 MW of baseload generation capacity is situated in especially drought prone regions and that droughts severe enough to result in plant shutdowns occur once in three decades. Economic impact on the state would run well into the hundreds of millions while individual utilities will see lower cost impacts in absolute terms potentially leading to underinvestment in drought-mitigating measures. These potential economic and financial losses are then used as a basis to explore the possibilities for making investments in less water-intensive technologies for electricity supply. The alternative investment options are then compared to find the most cost effective. Such investments would alleviate the pressure on the state’s finite fresh surface water resources while simultaneously mitigating against any drought-induced electricity supply disruptions.
Type
Master's project
Department
Nicholas School of the Environment and Earth Sciences
Subject
Electricity
Drought
Permalink
https://hdl.handle.net/10161/1042
Citation
Milazi, Dominic (2009). The Impact of Drought on Electricity Supply in North Carolina. Master's project, Duke University. Retrieved from https://hdl.handle.net/10161/1042.
Collections
More Info
Show full item record