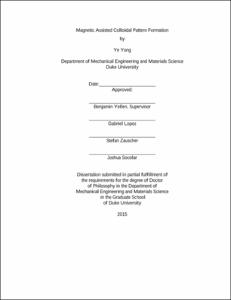 Pattern formation is a mysterious phenomenon occurring at all scales in nature. The beauty of the resulting structures and myriad of resulting properties occurring in naturally forming patterns have attracted great interest from scientists and engineers. One of the most convenient experimental models for studying pattern formation are colloidal particle suspensions, which can be used both to explore condensed matter phenomena and as a powerful fabrication technique for forming advanced materials. In my thesis, I have focused on the study of colloidal patterns, which can be conveniently tracked in an optical microscope yet can also be thermally equilibrated on experimentally relevant time scales, allowing for ground states and transitions between them to be studied with optical tracking algorithms.

In particular, I have focused on systems that spontaneously organize due to particle-surface and particle-particle interactions, paying close attention to systems that can be dynamically adjusted with an externally applied magnetic or acoustic field. In the early stages of my doctoral studies, I developed a magnetic field manipulation technique to quantify the adhesion force between particles and surfaces. This manipulation technique is based on the magnetic dipolar interactions between colloidal particles and their "image dipoles" that appear within planar substrate. Since the particles interact with their own images, this system enables massively parallel surface force measurements (>100 measurements) in a single experiment, and allows statistical properties of particle-surface adhesion energies to be extracted as a function of loading rate. With this approach, I was able to probe sub-picoNewton surface interactions between colloidal particles and several substrates at the lowest force loading rates ever achieved.

In the later stages of my doctoral studies, I focused on studying patterns formed from particle-particle interaction, which serve as an experimental model of phase transitions in condensed matter systems that can be tracked with single particle resolution. Compared with other research on colloidal crystal formation, my research has focused on multi-component colloidal systems of magnetic and non-magnetic colloids immersed in a ferrofluid. Initially, I studied the types of patterns that form as a function of the concentrations of the different particles and ferrofluid, and I discovered a wide variety of chains, rings and crystals forming in bi-component and tri-component systems. Based on these results, I narrowed my focus to one specific crystal structure (checkerboard lattice) as a model of phase transformations in alloy. Liquid/solid phase transitions were studied by slowly adjusting the magnetic field strength, which serves to control particle-particle interactions in a manner similar to controlling the physical temperature of the fluid. These studies were used to determine the optimal conditions for forming large single crystal structures, and paved the way for my later work on solid/solid phase transitions when the angle of the external field was shifted away from the normal direction. The magnetostriction coefficient of these crystals was measured in low tilt angle of the applied field. At high tilt angles, I observed a variety of martensitic transformations, which followed different pathways depending on the crystal direction relative to the in-plane field.

In the last part of my doctoral studies, I investigated colloidal patterns formed in a superimposed acoustic and magnetic field. In this approach, the magnetic field mimics "temperature", while the acoustic field mimics "pressure". The ability to simultaneously tune both temperature and pressure allows for more efficient exploration of phase space. With this technique I demonstrated a large class of particle structures ranging from discrete molecule-like clusters to well ordered crystal phases. Additionally, I demonstrated a crosslinking strategy based on photoacids, which stabilized the structures after the external field was removed. This approach has potential applications in the fabrication of advanced materials.

My thesis is arranged as follows. In Chapter 1, I present a brief background of general pattern formation and why I chose to investigate patterns formed in colloidal systems. I also provide a brief review of field-assisted manipulation techniques in order to motivate why I selected magnetic and acoustic field to study colloidal patterns. In chapter 2, I present the theoretical background of magnetic manipulation, which is the main technique used in my research. In this chapter, I will introduce the basic knowledge on magnetic materials and theories behind magnetic manipulation. The underlining thermodynamic mechanisms and theoretical/computational approaches in colloidal pattern formation are also briefly reviewed. In Chapter 3, I focus on using these concepts to study adhesion forces between particle and surfaces. In Chapter 4, I focus on exploring the ground states of colloidal patterns formed from the anti-ferromagnetic interactions of mixtures of particles, as a function of the particle volume fractions. In Chapter 5, I discuss my research on phase transformations of the well-ordered checkerboard phase formed from the equimolar mixture of magnetic and non-magnetic beads in ferrofluid, and I focus mainly on phase transformations in a slowly varying magnetic field. In Chapter 6, I discuss my work on the superimposed magnetic and acoustic field to study patterns formed from monocomponent colloidal suspensions under vertical confinement. Finally, I conclude my thesis in Chapter 7 and discuss future directions and open questions that can be explored in magnetic field directed self-organization in colloidal systems.