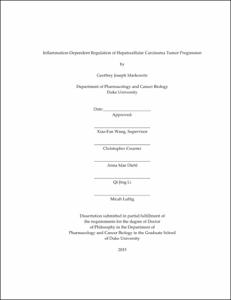 Liver cancer is a devastating disease that is the 5th most common cancer in men, 7th most common cancer in women, and the 3rd leading cause of cancer-related mortality. This disease arises from multiple etiological factors, including hepatitis viruses, environmental toxins, alcohol abuse, and metabolic syndrome, which induce a state of chronic inflammation. This diseased liver tissue background is a drastically different microenvironment from the healthy liver, especially with regards to immune cell prevalence and presence of mediators of immune function. It has been well-established that this altered tissue background contributes significantly to the tumorigenic process, yet its effects on the progression of the disease are more poorly understood.

To better understand the consequences of liver disease on tumor growth and the interplay with its microenvironment, we first utilized two standard methods of fibrosis induction and orthotopic implantation of tumors into the inflamed and fibrotic liver to mimic the liver condition in human HCC patients, and examined the immune infiltrate. Compared to non-diseased controls, tumor growth is significantly enhanced under fibrotic conditions. The immune cells that infiltrated the tumors are also drastically different, with decreased proportions of natural killer cells but greatly increased numbers of immune-suppressive CD11b+ Gr1hi myeloid cells in both models of fibrosis. In addition, there are model-specific differences: increased proportions of CD11b+ myeloid cells and CD4+ CD25+ T-cells are found in tumors in the bile duct ligation model but not in the carbon tetrachloride model. Importantly, the skewed immune infiltration into the tumor, while having some commonalities with the non-tumor tissue, had several distinct, tumor-specific populations. Induction of fibrosis also alters the cytokine production of implanted tumor cells, which could have far-reaching consequences on the immune infiltrate and its functionality. Taken together, this work demonstrates that the combination of fibrosis induction with orthotopic tumor implantation results in a markedly different tumor microenvironment and tumor growth kinetics.

Appreciating that the altered immune microenvironment dramatically shifts tumor progression, we sought to further explore the effects of individual inflammatory mediators on the development of the disease. Interleukin 18 (IL-18) is an inflammatory cytokine that is markedly increased in the circulation of patients with HCC correlated with poor prognosis. However, the precise role for IL-18 in HCC remains unclear, with reports presenting both pro- and anti-tumorigenic activities. To answer this question definitively, we interrogated in more detail the expression profiles of IL-18 in tissue specimens from HCC patients and conducted experimentation using multiple clinically relevant mouse models to explore the functional role of this cytokine in the context of HCC. Our results indicate that IL-18 exerts a tumor-suppressive effect mediated in large part by alterations in survival and functionality of T-lymphocytes which infiltrated the tumor microenvironment. This tumor-suppressive effect is however dependent upon the inflammatory milieu: In the absence of an inflammatory environment, whether from a chemical carcinogenesis model or a fibrosis induction model, loss of IL-18 signaling does not affect tumor growth. This effect is also stage-dependent. Taken together, our findings establish a tumor-suppressive role for IL-18 in established HCC and provide a mechanistic explanation for the complex relationship between its expression pattern and HCC prognosis.

In summary, this work demonstrates a dramatic shift in the microenvironment of developing HCC tumors in the presence of chronic inflammatory stimuli. This microenvironment, which more accurately models the situation in which tumors develop and progress in patients, alters the presence and functionality of many immune mediators. In particular, IL-18 signaling is a powerful mediator of tumor progression, however observation of its functionality is dependent on an inflammatory context. This work provides new insight into the complex processes underlying HCC tumor progression, and emphasizes the necessity for more accurate modeling of HCC progression in mice which takes into account the drastic changes in the tissue caused by chronic liver disease.