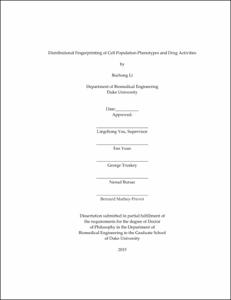 From gene expression to protein abundance, biological measurements have traditionally been taken as population averages. Studies over the past decade, however, have established the biological relevance of population heterogeneity, even for cells with identical genetic background. The advancements of our understanding, albeit transformative, have been almost exclusively focused on the generation and the regulation of population heterogeneity and its implications in cell-fate decisions. What’s less appreciated is the potential of using population heterogeneity measurements as an information source of cellular physiology and network dynamics. While gene expression from a signaling network in a single cell is stochastic and unpredictable, the distribution of the gene expression in a sufficiently large cell population is uniquely determined by the signaling network and is deterministic. This distribution represents a quantitative fingerprint for the cell population under a specific environmental condition. I established and characterized a computational platform using stochastic modeling of the Myc/Rb/E2F network that supports the analysis of distributional data—how it changes as a function of perturbation and how it can be used to infer cellular or external variables of interest. I then demonstrated that a viral-mediated gene expression probe can be effectively and efficiently employed to generate heterogeneity fingerprints of cell populations and differentiate different cell lines as well as characterize drug activities.