Ontogeny of Lower Limb Morphology and Proportions in the Dinaledi Hominins 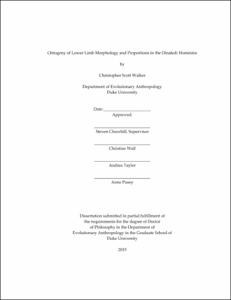 The discovery of hundreds of fossil hominin remains from the Dinaledi Chamber of Rising Star cave in South Africa included dozens of immature elements attributed to multiple individuals. Some of these elements are amongst the most complete in the Dinaledi assemblage, but have not yet been fully studied. Thorough examination of these immature remains is important because they can provide a more complete understanding of the morphology of the Dinaledi hominins, facilitate an assessment of morphological development in the assemblage, and allow for direct comparisons with other immature fossil hominins. This dissertation focuses on the most diagnostic specimens of the immature lower limb (with reference to the immature upper limb and the mature sample) from the site and utilizes a comparative approach examining developmental variation in the proximal femur and limb proportions of extinct and extant ape species to discern the ontogenetic basis of the adult Dinaledi hominin form.

The first portion of this dissertation addresses the development of proximal femoral shape in an ontogenetic series of femora from the Dinaledi hominins, modern humans, chimpanzees, and gorillas. Results indicate that the development of proximal diaphyseal shape and neck-shaft angle are conserved within Homininae, but that neck shape may develop differently in bipeds than non-bipeds. The absolute shape of the femoral neck, however, markedly differs between the Dinaledi sample and modern humans, with greater anteroposterior constriction of the neck in the former, potentially due to increased superioinferior loading of the region associated with differing locomotor kinematics between species.

The second portion of this dissertation investigates the relative proportions of the immature Dinaledi lower limb. To date, the only lower limb long bone preserving the entire diaphysis and an articular surface to be recovered from the chamber, is the immature tibia, U.W. 101-1070. The length of this specimen was evaluated relative to the size of the preserved joint surface in an ontogenetic context and was found to be relatively long compared to other fossil hominins and even modern humans. The humero-tibial proportions of the immature Dinaledi hominins were found to be outside of the range of chimpanzees and gorillas, but comparable to modern humans and the immature Homo erectus specimen KNM-ER 15000. Together, these findings demonstrate that, with respect to relative lower limb length, the Dinaledi hominins are highly derived.

The mixture of primitive (australopith-like) and derived (Homo-like) features of the Dinaledi hominins identified in this dissertation are consistent with other early work on the assemblage and imply that the Dinaledi chamber contains Plio-Pleistocene hominins. Given small brain and predicted body sizes for the Dinaledi hominins, the results presented here suggest that relative limb elongation may have occurred prior to increases in brain and body size during hominin evolution and that bipedal energetic efficiency may have been the primary locus of selection.