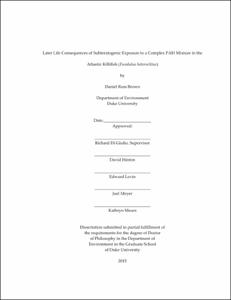 Subteratogenic and other low-level chronic exposures to toxicant mixtures are an understudied threat to environmental and human health. It is especially important to understand the effects of these exposures for contaminants, such as polycyclic aromatic hydrocarbons (PAHs) a large group of more than 100 individual compounds, which are important environmental (including aquatic) contaminants. Aquatic sediments constitute a major sink for hydrophobic pollutants, and studies show PAHs can persist in sediments over time. Furthermore, estuarine systems (namely breeding grounds) are of particular concern, as they are highly impacted by a wide variety of pollutants, and estuarine fishes are often exposed to some of the highest levels of contaminants of any vertebrate taxon. Acute embryonic exposure to PAHs results in cardiac teratogenesis in fish, and early life exposure to certain individual PAHs and PAH mixtures cause heart alterations with decreased swimming capacity in adult fish. Consequently, the heart and cardiorespiratory system are thought to be targets of PAH mixture exposure. While many studies have investigated acute, teratogenic PAH exposures, few studies have longitudinally examined the impacts of subtle, subteratogenic PAH mixture exposures, which are arguably more broadly applicable to environmental contamination scenarios. The goal of this dissertation was to highlight the later-life consequences of early-life exposure to subteratogenic concentrations of a complex, environmentally relevant PAH mixture.

A unique population of Fundulus heteroclitus (the Atlantic killifish or mummichog, hereafter referred to as killifish), has adapted to creosote-based polycyclic aromatic hydrocarbons (PAHs) found at the Atlantic Wood Industries (AW) Superfund site in the southern branch of the Elizabeth River, VA, USA. This killifish population survives in a site heavily contaminated with a mixture of PAHs from former creosote operations. They have developed resistance to the acute toxicity and teratogenic effects caused by the mixture of PAHs in sediment from the site. The primary goal of this dissertation was to compare and contrast later-life outcomes of early-life, subteratogenic PAH mixture exposure in both the Atlantic Wood killifish (AW) and a naïve reference population of killifish from King’s Creek (KC; a relatively uncontaminated tributary of the Severn River, VA). Killifish from both populations were exposed to subteratogenic concentrations of a complex PAH-sediment extract, Elizabeth River Sediment Extract (ERSE), made by collecting sediment from the AW site. Fish were reared over a 5-month period in the laboratory, during which they were examined for a variety of molecular, physiological and behavioral responses.

The central aims of my dissertation were to determine alterations to embryonic gene expression, larval swimming activity, adult behavior, heart structure, enzyme activity, and swimming/cardiorespiratory performance following subteratogenic exposure to ERSE. I hypothesized that subteratogenic exposure to ERSE would impair cardiac ontogenic processes in a way that would be detectable via gene expression in embryos, and that the misregulation of cardiac genes would help to explain activity changes, behavioral deficits, and later-life swimming deficiencies. I also hypothesized that fish heart structure would be altered. In addition, I hypothesized that the AW killifish population would be resistant to developmental exposures and perform normally in later life challenges. To investigate these hypotheses, a series of experiments were carried out in PAH-adapted killifish from Elizabeth River and in reference killifish. As an ancillary project to the primary aims of the dissertation, I examined the toxicity of weaker aryl hydrocarbon receptor (AHR) agonists in combination with fluoranthene (FL), an inhibitor of cytochrome P4501A1 (CYP1A1). This side project was conducted in both Danio rerio (zebrafish) and the KC and AW killifish.

Responses to AHR agonists resulted in a ranking of relative potency for agonists, and determined which agonists, when combined with FL, caused cardiac teratogenesis. These experiments showed interesting species differences for zebrafish and killifish. To probe mechanisms responsible for cardiotoxicity, a CYP1A-morpholino and a AHR2-morpholino were used to mimic FL effects or attempt to rescue cardiac deformities respectively. Findings suggested that the cardiac toxicity elicited by weak agonist + FL exposure was likely driven by AHR-independent mechanisms. These studies stand in contrast to previous research from our lab showing that moderate AHR agonist + FL caused cardiac toxicity that can be partially rescued by AHR-morpholino knockdown.

My findings will form better characterization of mechanisms of PAH toxicity, and advance our understanding of how subteratogenic mixtures of PAHs exert their toxic action in naïve killifish. Furthermore, these studies will provide a framework for investigating how subteratogenic exposures to PAH mixtures can impact aquatic organismal health and performance. Most importantly, these experiments have the potential to help inform risk assessment in fish, mammals, and potentially humans. Ultimately, this research will help protect populations exposed to subtle PAH-contamination.