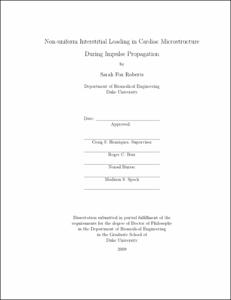 Impulse propagation in cardiac muscle is determined not only by the excitable properties of the myocyte membrane, but also by the gross and fine structure of cardiac muscle. Ionic diffusion pathways are defined by the muscle's interconnected myocytes and interweaving interstitial spaces. Resistive variations arising from spatial changes in tissue structure, including geometry, composition and electrical properties have a significant impact on the success or failure of impulse propagation. Although much as been learned about the impact of discrete resistive architecture of the intracellular space, the role of the interstitial space in the spread of electrical activity is less well understood or appreciated at the microscopic scale.

The interstitial space, or interstitium, occupies from 20-25% of the total heart volume.

heterogeneous, encompassing non-myocyte cell structures and a conglomeration of

extracellular matrix proteins. The spatial distribution of the interstitium can vary from confined spaces between abutting myocytes and tightly packed cardiac fibers to large gaps between cardiac bundles and sheets

This work presents a discrete multidomain formulation that describes the three-dimensional ionic diffusion pathways between connected myocytes within a variable interstitial physiology and morphology. Unlike classically used continuous and discontinuous models of impulse propagation, the intracellular and extracellular spaces are represented as spatially distinct volumes with dynamic and static boundary conditions that electrically couple neighboring spaces to form the electrically cooperative tissue model. The discrete multidomain model provides a flexible platform to simulate impulse propagation at the microscopic scale within a three-dimensional context. The three-dimensional description of the interstitial space that

encompasses a single cell improves the capability of the model to realistically investigate the impact of the discontinuous and electrotonic inhomogeneities of the myocardium's interstitium.

Under the discrete multidomain representation, a non-uniformly described interstitium

electrotonic load perpendicular to the direction of the propagating wavefront. During

alterations due to variations in loads experienced radially that would have been otherwise masked in traditional model descriptions. Findings present a mechanism for eliminating myocyte membrane participation in impulse propagation, as the result of decreased loading experienced radially from a non-uniformly resistive extracellular space. Ultimately, conduction velocity increases by decreasing the "effective" surface-to-volume ratio, as theoretically hypothesized to occur in the conducting Purkinje tissue.