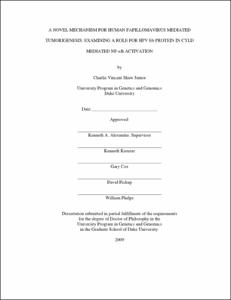 Human papillomavirus (HPV) infection of mucosal epithelium by `high-risk' HPV types has a prominent role in the development of anogenital intraepithelial neoplasias and carcinomas. Human epithelial cells transformed with the HPV E6 oncoprotein survive even under conditions that normally lead to cell apoptosis. This phenomenon has been attributed to HPV E6's ability to promote the degradation of the tumor suppressor protein p53. More recently, it has been demonstrated that HPV E6 contributes to activation of the NF-kB pathway. NF-kB is a transcription factor involved in the regulation of genes associated with cellular proliferation, apoptosis and inflammatory responses. In addition to p53 suppression, HPV E6 modulation of NF-kB activation presents another mechanism for HPV-driven tumorigenesis. However, it was not known how HPV E6 promotes NF-kB pathway activation. To address how HPV E6 leads to NF-kB activation, we identified an association between HPV E6 and the human cylindromatosis gene product (CYLD). CYLD is an endogenous inhibitor of canonical NF-kB activation. We showed that HPV E6 proteins could precipitate CYLD in vitro using a co-immunoprecipitation assay. Demonstrating that HPV E6 and CYLD proteins bind each other raised the possibility that this binding relationship would have a functional effect upon the NF-kB pathway by altering CYLD-mediated suppression of NF-kB activation. To identify HPV E6 functional relationship with CYLD and to determine how HPV E6 activates the NF-kB pathway, we transfected cells with either HPV E6 expression vectors containing the high-risk HPV type 16 E6 or the low-risk HPV type 11 E6 along with a CYLD expression vector. We showed HPV16 E6 expression in 293 cells blocked the ability of CYLD to inhibit CD40 ligand-stimulated NF-kB activation. Interestingly, HPV11 E6 was unable to inhibit CYLD mediated suppression of NF-kB in our system. CYLD had previously been shown to suppress NF-kB activation by removing stimulatory lysine 63-linked ubiquitin chains from TRAF2. We found CYLD expression in 293 cells leads to dose-dependent reduction in TRAF2 levels. This CYLD-mediated loss of TRAF2 is inhibited by co-expression of high-, but not low-risk E6 proteins. It was known that CYLD phosphorylation in vivo suppresses CYLD deubiquitination actions of canonical pathway proteins; we therefore tested the extent of CYLD phosphorylation when co-expressed with HPV E6, and discovered that CYLD phosphorylation was increased in the presence of HPV E6. This compilation of experiments suggests that with HPV16 E6 binding to CYLD, the E6 protein blocks CYLD-mediated TRAF2 loss and thereby TRAF2 is available to activate the canonical NF-κB pathway. Blocking HPV E6-mediated NF-kB activation may prove beneficial as a means for designing therapies that inhibit HPV-mediated tumorigenesis. The differences we detected between HPV11 E6 and HPV16 E6 are supported by other studies that showed E6 protein variations account for molecular and clinical differences among HPV infection outcomes. Similarly, there exist intratype E6 variations in HPV16. We obtained cervical specimens from patients with cytopathogenic changes consistent with the onset of cervical dysplasia infected with HPV16 E6 and the human immunodeficiency virus. We hypothesized the immunocompromised individual may harbor unique HPV16 E6 variants. Using PCR detection methods to amplify the HPV16 E6 DNA and sequencing technology, we identified that some of the samples indeed had nucleotide polymorphisms, resulting in amino acid sequence changes. However, the HPV E6 variants we detected were previously described, and fit know geographic HPV clades. Some of the HPV E6 variants we observed are suggested to be associated with progression to cervical cancer, but further evaluation is required.