Pictures That Satisfy: Modernist Discourses and the Politics of Race, Gender, and Nation in the Art of Irma Stern (1894-1966) 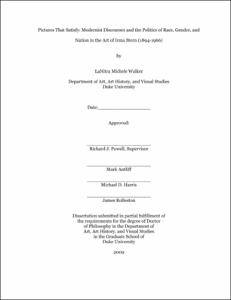 This dissertation examines South African artist Irma Stern’s contributions to modernism in South Africa and to modernism as a global movement. It analyzes how Stern’s interactions with South Africans, combined with her early artistic training in Germany and her cultural connections to the South African Jewish community, helped her to bring critical issues of race, gender, and nation into focus through her work. This study goes beyond the work of previous scholars who have suggested that Stern was uninterested in social or political causes, arguing that Stern was acutely aware of how social and political themes contributed to modernism’s development in Europe. Moreover, this study concludes that Stern employed similar strategies to develop a South African modernism. Although she often spoke pejoratively about nonwhite South Africans, she was cognizant of the fact that the act of painting nonwhites made significant artistic and political statements.

Because Stern is virtually unknown in the United States, this study will do the following: 1) Introduce Stern to an American audience by discussing her work from the beginning of her artistic training in Germany in 1913 to her death in 1966; 2) Reconnect Stern to the larger global debates about modernism in the twentieth century; 3) Analyze Stern’s works that have received little or no attention in previous scholarship; and 4) Discuss the long-term influence that Stern’s work had in shaping the direction of South African art before, during, and after apartheid.

Formal analysis and close readings of Stern's oil paintings, drawings, travel narratives, and watercolors are crucial in understanding how she used her artistic talents to record visual interpretations of South African culture history. As one of only a few internationally respected South African artists of the apartheid era, an examination of Stern's work and career allows for a more complex understanding of how race, gender, and nation contributed to the development of modernism in South African art history.