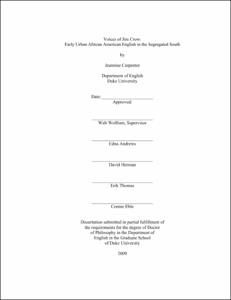 Debate about the development of African American English (AAE) dominated sociolinguistic inquiry for the second half of the 20th century and continues to be a subject of investigation. All hypotheses about the development of AAE integrate ideas of shared linguistic features coupled with strong regional influences or founding effects. Most Southern evidence used in the development of these hypotheses, however, is from rural communities or somehow unique enclave communities. The early urban centers of African American life in the South that followed the abolition of slavery and disintegration of plantation life have seldom been investigated with respect to the development of AAE. This study examines precisely those sites looking at AAE in three Southern urban centers during the time of Jim Crow or institutionalized segregation: Birmingham, Memphis, and New Orleans.

This analysis is based on a series of tape-recorded oral history interviews that were conducted as part of the Behind the Veil project at Duke University. The Behind the Veil project was launched in 1990 at Duke and the majority of the interviews were conducted between 1994 and 1997. Each speaker completed a survey regarding her/his life history, education, professional history, and family background. The speakers used for this study were chosen based on age (all born before 1942) and residency status in their respective communities - all speakers are lifelong residents of Birmingham, Memphis, or New Orleans. These criteria and others shape an inclusive corpus of 100 total tape-recorded interviews with 33 from Birmingham, 35 from Memphis, and 32 from New Orleans.

These data contribute to the continuing study and scholarship on the historical development of African American English, providing the first multi-community overview of core African American English linguistic variables from the early urban South. The trans-regional similarities of linguistic variables in AAE speakers are often attributed to the influence of early Southern English varieties. These data confirm the early presence of these variables in African American urban centers in the South, but also suggest how language ideologies relate to dialect development.