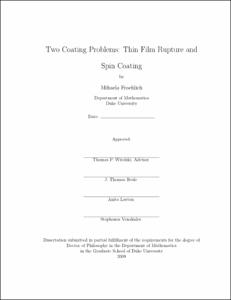 In this work we study two fluid dynamics problems which are of particular interest in industries where thin film coating is a part of a production process, like optical coating, insulating layers in micro-circuitry, adhesives and painting. Experiments show that for very thin films of viscous liquids van der Waals intermolecular forces can produce instabilities leading to film ruptures. We consider this problem of thin film rupture driven by van der Waals forces and look for axisymmetric steady state solutions. Small perturbations from these solutions will lead to finite-time rupture. Using different numerical approaches we look for the solutions close to rupture. We obtain more solutions via shooting method and show that finite difference schemes on uniform grids are inferior to shooting for this problem. The second problem comes from a process called spin coating, one of the methods used to coat uniform thin films in variety of industrial applications such as manufacturing magnetic and optical discs. In spin coating a drop of liquid spreads radially due to centrifugal effects from spinning and eventually yields a thin film of uniform thickness formed on the solid surface. In experiments fingering instabilities at the expanding front of the fluid layer have been observed. This has renewed interest in the study of the nonlinear dynamics of such problems. We derive the evolution equation for thin films in rotating polar coordinates. We solve the axisymmetric problem and give numerical and analytical results for steady states. For large fluid volumes in rotating cylinders, we show that when centrifugal and gravity forces dominate, steady state solution free-surface profiles are parabolas for the angular velocity less then the critical velocity, and for higher velocities film ruptures, producing truncated parabolic profiles with circular contact lines. We find the similar results for the steady state case when centrifugal and surface tension forces are dominant. FInally, we study the dynamics of the spin coating again considering three cases, as weill as including the influence of van der Waals and Marangoni forces.