Essays on the Impact of Regulation Policies 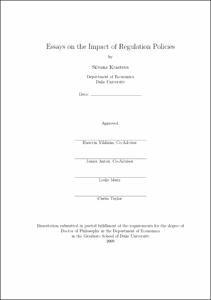 <p>Chapter 1 provides an overview of the existing theoretical literature on innovation and entrepreneurship. It summarizes some of the main findings of the effect of various means of protecting intellectual property on the innovation incentives and the level of entrepreneurship activity. A general observation is that much of the existing work compares the extremes of no protection and perfect protection and the resulting prediction is that perfect protection leads to higher innovation incentives. This is puzzling in light of the empirical evidence that shows the opposite trend. Chapter 2 explicitly takes into account the fact that patent protection is imperfect and likely to lie in between the two extremes. In addition, in more than 70% of infringement cases in the U.S., infringement damages are calculated according to the so-called reasonable royalties rule that essentially awards a portion of the imitator's realized revenues to the innovator. I show that incorporating these two facts result in a non-monotonic relationship between the patent strength and R&D investment if one moves from zero protection to perfect protection in a continuous way. The intuition is that when protection is less than perfect, though not zero, equilibrium may involve both imitation and damages. Viewing damages as an alternative source of profits, the innovator may be less aggressive in pursuing R&D as patents become stronger. This result has important welfare implications. Besides the well-known effect of reducing welfare due to less competitive markets, stronger protection can further curtail welfare by decreasing R&D investment.

<p>Chapter 3, coauthored with Professor Huseyin Yildirim, studies situations, in which one buyer sequentially negotiates with multiple suppliers to acquire goods or services that are either complements or substitutes to each other. We find that the buyer weakly prefers private negotiations because it creates strategic uncertainty about the outcomes from earlier negotiations, leading to less aggressive pricing. For substitutes, this strategic uncertainty is more beneficial for short expiries because long ones allow purchasing decisions to be made after all negotiations are over, creating enough competition on their own and leading to Bertrand prices. In contrast to substitutes, for which suppliers are in direct competition, complements create incentives for suppliers to coordinate their prices to extract the additional surplus resulting from the complementarities of their goods. In this case, introducing uncertainty through privacy is more beneficial for the buyer as suppliers' bargaining powers increase vis-á-vis the buyer because it creates greater coordination concerns. This leads to a somewhat surprising result that the buyer could benefit from negotiating with more powerful suppliers. The model enables an evaluation of certain laws and regulations that govern bilateral negotiations. For instance, open record/open meetings laws, setting rules on public access of information, generate efficient outcomes, but in general are harmful to the buyer. Similarly, the FTC's cooling-off rule sets long expiries by giving the buyer three days to cancel a contract, which generates efficient outcomes when goods are substitutes because of suppliers' Bertrand pricing, but reduces efficiency when goods are complements since long expiries make coordination harder to sustain.