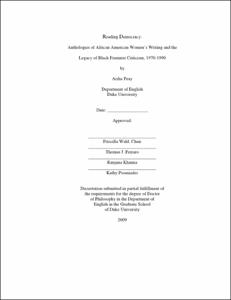 Taking as its pretext the contemporary moment of self-reflexive critique on the part of interdisciplinary programs like Women's Studies and American Studies, <italic>Reading Democracy</italic> historicizes a black feminist literary critical practice and movement that developed alongside black feminist activism beginning in the 1970s. This dissertation addresses the future direction of scholarship based in Women's Studies and African-American Studies by focusing on the institutionalized political effects of Women's Liberation and the black liberation movements: the canonization of black women's writing and the development of a black feminist critical practice. Tracing a variety of conceptions of black feminist criticism over the course of two decades, I argue that this critical tradition is virtually indefinable apart from its anthological framing and that its literary objects illustrate the radical democratic constitution of black women's political subjectivity.

Situating anthologies of black women's writing in relation to the social movement politics of the 1960s and 1970s, Reading Democracy explores how black feminist projects in the academy and the arts materialized the democratic principles of modern politics in the United States, understanding these principles as ethical desires that inspire self-constitution and creative and scholarly production. Constructing a literary critical and publication history, this dissertation identifies the democratic principles that the anthologies in this study materialize by analyzing them alongside the novels and short stories published during the 1970s and 1980s that they excerpt or otherwise reference, such as Toni Morrison's <italic>The Bluest Eye</italic> (1970), Audre Lorde's <italic>Zami: A New Spelling of My Name</italic> (1982), and Paule Marshall's <italic>Praisesong for the Widow</italic> (1983). The anthology facilitates the analysis of the single creative work's black feminist consciousness. Using the critical terms of democratic theory to mark the fulfillment of a political theory of black women's writing, as Smith first proposed, this dissertation arrives at a sense of democracy as a strategic zone of embodiment and a modern political imaginary forged by the recognition of "the others" in our midst who are coming to voice and are ineluctably constituted by the same ethical desires as are we ourselves.