The Limits of Wisdom and the Dialectic of Desire 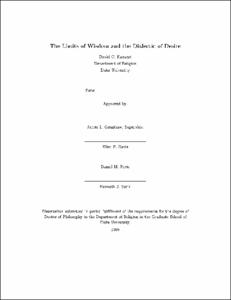 It is fair to identify the motive of this dissertation with the paradoxical formulation of Gerhard von Rad, to the effect that the essence of biblical Wisdom is disclosed where the sages articulate this wisdom as inherently limited. This coincidence of opposites has been widely embraced by commentators and read as evidence for the sages' encounter with an infinite divine transcendence, to which they responded in humility, and by which their epistemological certitudes were rebuked. Proceeding from these assumptions, the interpretation of Proverbs has widely concerned itself with two nodal points: (1) the fear-of YHWH as the central concept in Proverbs' articulation wisdom as a finite human operation, conducted in the presence of an infinite divine; and (2) the figuration of this sublime experience in the iconic form of Woman-Wisdom.

The hypothesis of von Rad lends itself to another trajectory that prioritizes immanence over transcendence. On this reading, the limit of Wisdom lies not between its mere appearance for us (i.e. finite human subjects) and its essential being in itself (corresponding to a noumenal, divine beyond) but rather runs through the field of appearance, which cannot be rendered coherent by the sages' discursive intervention. This non-symbolizable yet immanent check on the sages' wisdom is analyzed in terms of Lacan's Real, a kernel of being (in psychoanalytic terms, jouissance) entirely beyond the signified that nevertheless arises out of the operations of signification. If discourse is thus intrinsically self-defeating, the status of transcendence should re-evaulated with respect to "limit." Transcendence is not the site that disturbs the Symbolic field, but rather the aporetic conditions of linguistic meaning rely on an externalizing process--what I have called a "poetics of making transcendent"-- for a given discourse to maintain its own coherence, i.e. as that which would be coherent if not for the contingent, impossible object. The fear-of YHWH and Woman-Wisdom, whose importance no one disputes, are re-read from this perspective: the former according to Lacan's concept of the Master-Signifier, the latter according to object (a), the object cause of desire.