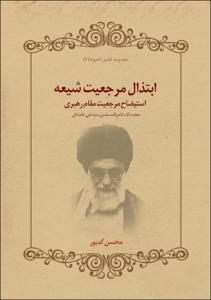 View / Download
4.9 Mb
Date
Author
Kadivar, M
Repository Usage Stats
314
views
336
downloads
Abstract
The story of Khamenei’s sole marja’iyyat has four parts. First, he was the capable orator serving the regime, with no claim to ijtihad, and wouldn’t even dream of Leadership and marja’iyyat: Hojjatol-Islam wal-Moslemin Khamenei. Second, he obtained Leadership and absolute authority as faqih-ruler based on the regime’s expediency from 4 June 1989: Ayatollah Khamenei, Supreme Leader. Third, he planned for marja’iyyat from late 1989 and officially announced it in Dec 1994: Grand Ayatollah Khamenei Marja-e’ Jayezol-Taqlid. Fourth, he endeavored for supreme and unique marja’iyyat from the summer of 1997: Imam Khamenei! And human greed has no limit. He is not the only one responsible in this problem; his clerical partners from Ayatollah Khomeini’s school share the blame in this trivialization of Shi’i marja’iyyat. The conclusion of this book is firstly, that it is impossible to qualify the Leader’s marja’iyyat, and secondly, that there exist numerous pieces of evidence and testimonies about his incompetence in issuing fatwas and in marja’iyyat.
Type
Book
Permalink
https://hdl.handle.net/10161/11131
Collections
More Info
Show full item record Research Professor in the Department of Religious Studies
Mohsen Kadivar is a research professor of Islamic studies at the department of Religious Studies, Duke University since 2009. He is a leading public intellectual and a theologian trained in Islamic seminaries in Iran, having earned the certificate of Ijtihad (the highest degree of Islamic studies) from the theologian seminary of Qom and received a PhD of Islamic Philosophy and theology from Tarbiate Modarress University in Tehran. His criticism of the Iranian regime led to hi