The Duke Aeolian Organ: The Journey of an American Musical Instrument 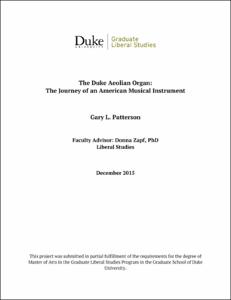 View / Download
26.8 Mb
Date
Author
Patterson, Gary
Advisor
Zapf, Donna
Repository Usage Stats
401
views
285
downloads
Abstract
The Aeolian Company built its last and largest church organ for Duke Chapel in 1932. The organ, one of the last examples of the Symphonic style of American organ building, survived three replacement attempts by the ideologues of the Neo-Baroque organ movement that swept the United States in the latter half of the 20th century. This organ reform movement apotheosized the mechanical-action organs of 17th and 18th century Europe, at the expense of early and mid-20th century American organs – many of which were heavily altered or entirely replaced. Fortunately, the Duke Aeolian was largely spared from such atrocities and was fully restored in 2009. This paper examines the rich cultural history of Duke’s Aeolian organ, including the efforts of those who sought to replace it, others who fought to preserve the organ, and the cultural and historical significance of the Aeolian as an American musical instrument. It is a fascinating and important story that needs to be told.
Type
Master's thesis
Department
Graduate Liberal Studies
Subject
Duke Chapel Organ
American Romantic Organ
Neo-Baroque Organ
Aeolian Organ
Symphonic Organ
Organ Reform Movement
Permalink
https://hdl.handle.net/10161/11213
Citation
Patterson, Gary (2015). The Duke Aeolian Organ: The Journey of an American Musical Instrument. Master's thesis, Duke University. Retrieved from https://hdl.handle.net/10161/11213.
Collections
More Info
Show full item record