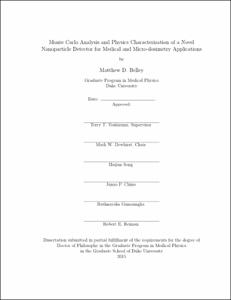 The outcomes for both (i) radiation therapy and (ii) preclinical small animal radio- biology studies are dependent on the delivery of a known quantity of radiation to a speciﬁc and intentional location. Adverse eﬀects can result from these procedures if the dose to the target is too high or low, and can also result from an incorrect spatial distribution in which nearby normal healthy tissue can be undesirably damaged by poor radiation delivery techniques. Thus, in mice and humans alike, the spatial dose distributions from radiation sources should be well characterized in terms of the absolute dose quantity, and with pin-point accuracy. When dealing with the steep spatial dose gradients consequential to either (i) high dose rate (HDR) brachytherapy or (ii) within the small organs and tissue inhomogeneities of mice, obtaining accurate and highly precise dose results can be very challenging, considering commercially available radiation detection tools, such as ion chambers, are often too large for in-vivo use.

In this dissertation two tools are developed and applied for both clinical and preclinical radiation measurement. The ﬁrst tool is a novel radiation detector for acquiring physical measurements, fabricated from an inorganic nano-crystalline scintillator that has been ﬁxed on an optical ﬁber terminus. This dosimeter allows for the measurement of point doses to sub-millimeter resolution, and has the ability to be placed in-vivo in humans and small animals. Real-time data is displayed to the user to provide instant quality assurance and dose-rate information. The second tool utilizes an open source Monte Carlo particle transport code, and was applied for small animal dosimetry studies to calculate organ doses and recommend new techniques of dose prescription in mice, as well as to characterize dose to the murine bone marrow compartment with micron-scale resolution.

Hardware design changes were implemented to reduce the overall ﬁber diameter to <0.9 mm for the nano-crystalline scintillator based ﬁber optic detector (NanoFOD) system. Lower limits of device sensitivity were found to be approximately 0.05 cGy/s. Herein, this detector was demonstrated to perform quality assurance of clinical 192Ir HDR brachytherapy procedures, providing comparable dose measurements as thermo-luminescent dosimeters and accuracy within 20% of the treatment planning software (TPS) for 27 treatments conducted, with an inter-quartile range ratio to the TPS dose value of (1.02-0.94=0.08). After removing contaminant signals (Cerenkov and diode background), calibration of the detector enabled accurate dose measurements for vaginal applicator brachytherapy procedures. For 192Ir use, energy response changed by a factor of 2.25 over the SDD values of 3 to 9 cm; however a cap made of 0.2 mm thickness silver reduced energy dependence to a factor of 1.25 over the same SDD range, but had the consequence of reducing overall sensitivity by 33%.

For preclinical measurements, dose accuracy of the NanoFOD was within 1.3% of MOSFET measured dose values in a cylindrical mouse phantom at 225 kV for x-ray irradiation at angles of 0, 90, 180, and 270˝. The NanoFOD exhibited small changes in angular sensitivity, with a coeﬃcient of variation (COV) of 3.6% at 120 kV and 1% at 225 kV. When the NanoFOD was placed alongside a MOSFET in the liver of a sacriﬁced mouse and treatment was delivered at 225 kV with 0.3 mm Cu ﬁlter, the dose diﬀerence was only 1.09% with use of the 4x4 cm collimator, and -0.03% with no collimation. Additionally, the NanoFOD utilized a scintillator of 11 µm thickness to measure small x-ray ﬁelds for microbeam radiation therapy (MRT) applications, and achieved 2.7% dose accuracy of the microbeam peak in comparison to radiochromic ﬁlm. Modest diﬀerences between the full-width at half maximum measured lateral dimension of the MRT system were observed between the NanoFOD (420 µm) and radiochromic ﬁlm (320 µm), but these diﬀerences have been explained mostly as an artifact due to the geometry used and volumetric eﬀects in the scintillator material. Characterization of the energy dependence for the yttrium-oxide based scintillator material was performed in the range of 40-320 kV (2 mm Al ﬁltration), and the maximum device sensitivity was achieved at 100 kV. Tissue maximum ratio data measurements were carried out on a small animal x-ray irradiator system at 320 kV and demonstrated an average diﬀerence of 0.9% as compared to a MOSFET dosimeter in the range of 2.5 to 33 cm depth in tissue equivalent plastic blocks. Irradiation of the NanoFOD ﬁber and scintillator material on a 137Cs gamma irradiator to 1600 Gy did not produce any measurable change in light output, suggesting that the NanoFOD system may be re-used without the need for replacement or recalibration over its lifetime.

For small animal irradiator systems, researchers can deliver a given dose to a target organ by controlling exposure time. Currently, researchers calculate this exposure time by dividing the total dose that they wish to deliver by a single provided dose rate value. This method is independent of the target organ. Studies conducted here used Monte Carlo particle transport codes to justify a new method of dose prescription in mice, that considers organ speciﬁc doses. Monte Carlo simulations were performed in the Geant4 Application for Tomographic Emission (GATE) toolkit using a MOBY mouse whole-body phantom. The non-homogeneous phantom was comprised of 256x256x800 voxels of size 0.145x0.145x0.145 mm3. Diﬀerences of up to 20-30% in dose to soft-tissue target organs was demonstrated, and methods for alleviating these errors were suggested during whole body radiation of mice by utilizing organ speciﬁc and x-ray tube ﬁlter speciﬁc dose rates for all irradiations.

Monte Carlo analysis was used on 1 µm resolution CT images of a mouse femur and a mouse vertebra to calculate the dose gradients within the bone marrow (BM) compartment of mice based on diﬀerent radiation beam qualities relevant to x-ray and isotope type irradiators. Results and ﬁndings indicated that soft x-ray beams (160 kV at 0.62 mm Cu HVL and 320 kV at 1 mm Cu HVL) lead to substantially higher dose to BM within close proximity to mineral bone (within about 60 µm) as compared to hard x-ray beams (320 kV at 4 mm Cu HVL) and isotope based gamma irradiators (137Cs). The average dose increases to the BM in the vertebra for these four aforementioned radiation beam qualities were found to be 31%, 17%, 8%, and 1%, respectively. Both in-vitro and in-vivo experimental studies conﬁrmed these simulation results, demonstrating that the 320 kV, 1 mm Cu HVL beam caused statistically signiﬁcant increased killing to the BM cells at 6 Gy dose levels in comparison to both the 320 kV, 4 mm Cu HVL and the 662 keV, 137Cs beams.