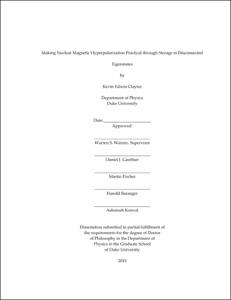 There are two fundamental limitations in magnetic resonance: the poor signal amplitude and the short duration before the system return to equilibrium. Hyperpolarization methods solve the problem of signal amplitude, however, the duration of the hyperpolarized signal is still limited by the spin-lattice relaxation time, T1. Disconnected eigenstates provide a mechanism by which hyperpolarization can be stored for several times T1. This thesis contributes to the knowledge of these states in four important ways. First, the decay of hyperpolarized magnetization of gas is simulated in lung tissue with a contrast agent, yielding insights about the optimal field strength for imaging. Second, I show that it is possible to rapidly discover and characterize disconnected eigenstates by showing that they can be measured without synthesizing the isotopically labeled compound. Third, I extend the spin systems that can support disconnected eigenstates by expanding the theory to include spin-1 nuclei. Finally, I show that disconnected states with long lifetimes can be populated in conjunction with hyperpolarization techniques to simultaneously yield large signal amplitudes for long durations.

Applications of hyperpolarized spin order are likely to be in complex geophysical or biological structures. Understanding the effect of the inhomogeneous fields created when such structures are placed in a magnetic field on hyperpolarized spin order is a necessity to characterize the experimental signal. An example case of hyperpolarized 3He and 129Xe diffusing through lung tissue is examined. In particular a Monte Carlo simulation tool, combined with a magnetic field map of the inhomogeneous field created by mouse lung tissue, is used to determine the dephasing rate of hyperpolarized 3He and 129Xe in the presence of SuperParamagnetic Iron Oxide Nanoparticles (SPION). Contributions to the dephasing rate include the inhomogeneous field, the SPION magnetic field, and dephasing caused by collisions with the confining geometry. The sensitivity of either gas to SPION increases with increasing SPION concentration and decreasing field strength.

There are some general rules about what makes for a disconnected eigenstate (or singlet state) with a long lifetime. However, no systematic experimental study has been undertaken due to the cost and time-constraints of synthesizing the labeled species for study. I show that synthesis is not a barrier for characterizing the long-lived states. Instead the lifetimes may be determined by using the naturally occurring doubly-labeled isotopomer. I verified this method with two compounds, diphenyl acetylene (DPA) and diethyl oxylate (DEO). The former was determined to have a singlet lifetime TS = 251.40 ±3.16 s from the synthesized species, while the naturally occurring isotopomer yielded a lifetime TS = 202 ±55.30 s, both substantially longer than the spin-lattice relaxation time, T1 = 1.63 ±0.01s. In DEO, the lifetime from the disconnected eigenstate was determined to be TS = 14.62 ±0.76 s (synthesized), TS = 19.32 ±3.16 s (naturally occurring). This method is applied to a range of compounds ranging from simple four-spin systems, such as diacetylene (TS = 48.80 ±22.74 s, T1 = 18.66 ±1.16 s) to eight spin systems in dimethylmaleic anhydride (TS = 27.25 ±3.39 s, T1 = 9.38 ±0.43 s). Additionally, a family of compounds including naphthalene (TS = 4.37 ±0.34 s, T1 = 11.33 ±4.89 s), biphenyl (TS = 3.09 ±0.66 s, T1 = 4.69 ±0.10 s), and DPA show that the rotation of the phenyl rings and intermolecular dipole-dipole relaxation can be critical to the relaxation dynamics.

One particular method of accessing the disconnected eigenstate involves coupling a chemically equivalent spin-1/2 pair asymmetrically to an auxiliary spin-1/2 pair. I demonstrate that the disconnected state may still be accessed when the auxiliary nuclei are spin-1. This has two distinct advantages. When the auxiliary nuclei change from proton to deuterium, the couplings are reduced by a factor of ~6.5 which prevents the disconnected state from relaxing as rapidly back to equilibrium. This is demonstrated in diacetylene-d2 and DPA-d10, where the singlet lifetime was extended by a factor of ~1.7 via deuteration (TS,1H = 49 ±23 s, TS,2H = 83 ±30 s for diacetylene and TS,1H = 274 ±6.1 s, TS,2H = 479 ±83 s for DPA). Additionally, by reducing the coupling strength, deuteration allows additional structural moieties to be explored, such as RDC=CDR. One such structure is explored in trans-ethylene-d2, where the singlet character of the protons can be accessed by the reduced coupling to the deuterium. Additionally, this allows for a relatively strong deuterium-deuterium scalar coupling, requiring modification to the theory. This is carried out analytically, and implications for the relaxation properties are performed using a spin-dynamics numerical simulation. The lifetime of the disconnected state was determined to be TS = 30.2 ±12.3 s, compared to the T1 = 1.1 ±0.2 s at high concentration (270 mM), and increasing to TS = 117. ±9.80 s at low concentration (52 mM). The variation in long lifetime is attributed to intermolecular dipole-dipole relaxation.

Ultimately, the gains in lifetime from using disconnected eigenstates provide a means to the practical implementation of hyperpolarization in a wider range of experiments. A recent hyperpolarization method, Signal Amplification By Reversible Exchange in Shield Enables Alignment Transfer to Heteronuclei (SABRE-SHEATH) is shown to directly hyperpolarize long lived spin order in a diazirine containing molecule. Diazirine rings are three member N=N-C groups that can replace a methylene group and serve as a versatile MR and optical molecular tag. Hyperpolarization is accomplished by bubbling parahydrogen through a solution containing the diazirine and an iridium catalyst. Due to the chemical inequivalence of the 15N of the diazirine, hyperpolarization of longitudinal magnetization and singlet character could be observed by transfer to the high field spectrometer. Signal enhancements of over 14,000 were observed. The magnetic field strength required for buildup of magnetization and singlet character was derived and is in agreement with the experiment. The magnetization lifetime was observed to be T1 = 5.75 ±0.18 minutes and independent of field strength, while the lifetime of the singlet character was observed to be as long as TS = 30.1 ±13.4 minutes at low field (3 Gauss).

The combination of these experiments – understanding lifetimes in inhomogeneous magnetic fields that will be encountered in experiment, identification of disconnected eigenstates with long lifetimes via the naturally occurring isotopomer and extending these lifetimes even further with deuteration, and finally, the direct generation of long-lived hyperpolarized spin order – allows a measurement that required hyperpolarized spin order for the enhanced signal amplitude, to be carried out.