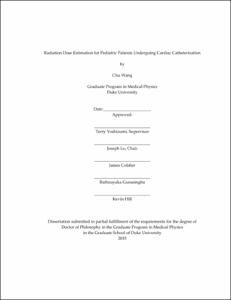 Patients undergoing cardiac catheterization are potentially at risk of radiation-induced health effects from the interventional fluoroscopic X-ray imaging used throughout the clinical procedure. The amount of radiation exposure is highly dependent on the complexity of the procedure and the level of optimization in imaging parameters applied by the clinician. For cardiac catheterization, patient radiation dosimetry, for key organs as well as whole-body effective, is challenging due to the lack of fixed imaging protocols, unlike other common X-ray based imaging modalities.

Pediatric patients are at a greater risk compared to adults due to their greater cellular radio-sensitivities as well as longer remaining life-expectancy following the radiation exposure. In terms of radiation dosimetry, they are often more challenging due to greater variation in body size, which often triggers a wider range of imaging parameters in modern imaging systems with automatic dose rate modulation.

The overall objective of this dissertation was to develop a comprehensive method of radiation dose estimation for pediatric patients undergoing cardiac catheterization. In this dissertation, the research is divided into two main parts: the Physics Component and the Clinical Component. A proof-of-principle study focused on two patient age groups (Newborn and Five-year-old), one popular biplane imaging system, and the clinical practice of two pediatric cardiologists at one large academic medical center.

Second, the cardiac dose for common fluoroscopic imaging techniques for pediatric patients in the two age groups was measured. Imaging technique settings with variations of individual key imaging parameters were tested to observe the quantitative effect of imaging optimization or lack thereof. Along with each measurement, the two standard system output indices, the Air Kerma (AK) and Dose-Area Product (DAP), were also recorded and compared to the measured cardiac and skin doses – the lack of correlation between the indices and the organ doses shed light to the substantial limitation of the indices in representing patient radiation dose, at least within the scope of this dissertation.

Third, the effective dose (ED) for Posterior-Anterior and Lateral fluoroscopic imaging techniques for pediatric patients in the two age groups was determined. In addition, the dosimetric effect of removing the anti-scatter grid was studied, for which a factor-of-two ED rate reduction was observed for the imaging techniques.

The Clinical Component involved analytical research to develop a validated retrospective cardiac dose reconstruction formulation and to propose the new Optimization Index which evaluates the level of optimization of the clinician’s imaging usage during a procedure; and small sample group of actual procedures were used to demonstrate applicability of these formulations.

In its entirety, the research represents a first-of-its-kind comprehensive approach in radiation dosimetry for pediatric cardiac catheterization; and separately, it is also modular enough that each individual section can serve as study templates for small-scale dosimetric studies of similar purposes. The data collected and algorithmic formulations developed can be of use in areas of personalized patient dosimetry, clinician training, image quality studies and radiation-associated health effect research.