Dancing in the Squares 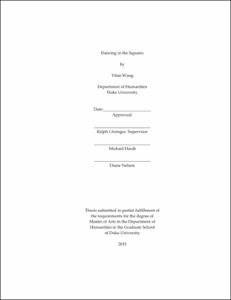 “Guangchangwu,” or what is literally translated as “square-dancing,” is a form of public dance that has been exceedingly popular, albeit controversial, in China over recent years. Most of the participants are elderly women in their late-50s or above, who roughly fall in the category called “dama” (“big-mother”). Usually, a dancing group assembles in the evening and dances on a daily basis to the music played through a portable loudspeaker. Yet, because many dancing sites are in or close to residential compounds, the music played, or, the alleged “noise pollution,” have caused numerous conflicts nationwide. During the summer 2014, I conducted a three-months fieldwork on the dance in China. In this thesis, I first demonstrated how a specific guangchangwu dancing group organized in relation to the space it occupied, then I traced the media discourse of guangchangwu and showed how it became linked with elderly women, dama. I argue that this seemingly new and overwhelmingly women-dominated public dance emerges from a series of long existing activities, the embedded gender politics of which articulates China’s recent and ongoing revision of policies and laws regarding birth control and the retirement age. Moreover, it is precisely against the backdrop of such social discourse that the practice and persistence of individual dancing groups becomes meaningful: through an effective organizational structure, these elderly women made their existence visible, audible, and their stories irreducible.