Losing the Will: Automatic Reactions to the Indifference Perceived in Others 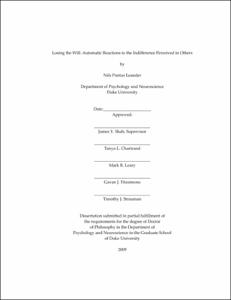 Three studies examine individuals' implicit sensitivity to the absence of motivation perceived in others and how the nature of this sensitivity is moderated by individuals' own motivational states. Using a subliminal priming paradigm, Study 1 tested a direct perception-behavior link between perceiving indifference in others and applying such indifference towards one's own pursuits. Study 2 then examined how individuals who are primed in advance with a nonconscious achievement goal show automatic counteraction to the indifference perceived in others. Using a video-based priming paradigm, Study 3 then found that such goal-driven counteraction to indifference occurred only among individuals with higher action control--those who had the ability to sustain goal pursuit after the intention to pursue it has been formed. In contrast, individuals with lower action control in Study 3 were more susceptible to indifference than all other participants, particularly when an achievement goal was made highly active in memory. These influences were found in all three studies to occur largely without participants' conscious intent or awareness.