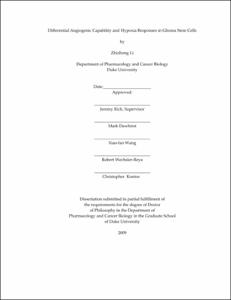 Malignant gliomas are highly lethal cancers characterized by florid angiogenesis. Glioma stem cells (GSCs), enriched through CD133 (Prominin1) selection, are highly tumorigenic and therapy resistance. However, the mechanism through which GSCs promote tumor growth was largely unknown. As we noticed that tumors derived from GSCs contain widespread tumor angiogenesis, necrosis, and hemorrhage, we examined thepotential of GSCs to support tumor angiogenesis. We measured the expression of a panel of angiogenic factors secreted by GSCs. In comparison with matched non-GSC populations, GSCs consistently secreted markedly elevated levels of vascular endothelial growth factor (VEGF), which were further induced by hypoxia. In an in vitro model of angiogenesis, GSC-conditioned medium significantly increased endothelial cell migration and tube formation compared with non-GSC glioma cell-conditioned medium. The proangiogenic effects of GSCs on endothelial cells were specifically abolished by the anti-VEGF neutralizing antibody bevacizumab, which is in clinical use for cancer therapy. Furthermore, bevacizumab displayed potent antiangiogenic efficacy in vivo and suppressed growth of xenografts derived from GSCs but limited efficacy against xenografts derived from a matched non-GSC population. As hypoxia is a key regulator of angiogenesis, I further examined hypoxic responses in GSCs to determine the molecular mechanisms underlying their angiogenic drive. I demonstrated that multiple hypoxia response genes, including the hypoxia-inducible factors (HIFs)-1a and -2a(EPAS-1) were differentially expressed in GSCs in comparison to non-stem glioma cells and normal neural progenitors. GSCs preferentially induced HIF2a; and HIF2a-regulated genes under hypoxia in comparison to non-stem glioma cells. In contrast, neural progenitor/stem cells did not induce HIF2a in response to hypoxia suggesting that the HIF2a hypoxic response is not a general stem cell response. Targeting HIF1a or HIF2a in GSCs using short hairpin RNA (shRNA) inhibited neurosphere formation efficiency, indicating a requirement for HIFs in cancer stem cell self-renewal. HIF1a and HIF2a were also necessary for VEGF expression in GSCs, but HIF2a was not required in matched non-stem glioma cells. In vivo experiments determined that knockdown of HIFs significantly attenuated the tumorigenic capacity of GSCs and increased survival of immunocompromised mice. Together, our work provides the first evidence that that GSCs can be a crucial source of key angiogenic factors in cancers due to their differential hypoxia responses. It also suggests that anti-angiogenic therapies can be designed to target GSC-specific molecular mechanisms of neoangiogenesis, including the expression and/or activity of HIF2a.