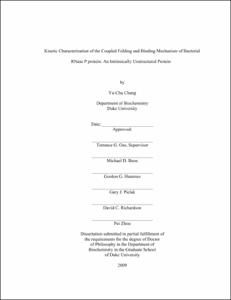 Understanding the interconversion between the thermodynamically distinguishable states present in a protein folding pathway provides not only the kinetics and energetics of protein folding but also insights into the functional roles of these states in biological systems. The protein component of bacterial RNase P holoenzyme from Bacillus subtilis (P protein) was used as a model system to elucidate the general folding/unfolding of an intrinsically unstructured protein (IUP) both in the absence and presence of ligands.

P protein was previously characterized as an intrinsically unstructured protein, and it is predominantly unfolded in the absence of ligands. Addition of small anions can induce the protein to fold. Therefore, the folding and binding are tightly coupled. Trimethylamine-N oxide (TMAO), an osmolyte that stabilizes the unliganded folded form of the protein, enabled us to study the folding process of P protein in the absence of ligand. Transient stopped-flow kinetic time courses at various final TMAO concentrations showed multiphase kinetics. Equilibrium "cotitration" experiments were performed using both TMAO and urea to obtain a TMAO-urea titration surface of P protein. Both kinetic and equilibrium studies show evidence of an intermediate state in the P protein folding process. The intermediate state is significantly populated and the folding rate constants involved in the reaction are slow relative to similar size proteins.

NMR spectroscopy was used to characterize the structural properties of the folding intermediate of P protein. The results indicate that the N-terminal (residues 2-19) and C-terminal regions (residues 91-116, 118 is the last residue) are mostly unfolded. 1H-15N HSQC NMR spectra were collected at various pH values. The results suggest that His 22 may play a major role in the energetics of the equilibria between the unfolded, intermediate, and native states of P protein.

Ligand-induced folding kinetics were also investigated to elucidate the overall coupled folding and binding mechanism of P protein and the holoenzyme assembly process. Stopped flow fluorescence experiments were performed at various final ligand concentrations and the data were analyzed using a minimal complexity model that included three conformational states (unfolded, intermediate and folded) in each of three possible liganding states (0, 1 and 2 ligands). The kinetic and equilibrium model parameters that best fit the data were used to calculate the flux through each of the six possible folding/binding pathways. This novel flux-based analysis allows evaluation of the relative importance of pathways in which folding precedes binding or vice versa. The results indicate that the coupled folding and binding mechanism of P protein is strongly dependent on ligand concentration. This conclusion can be generalized to other protein systems for which ligand binding is coupled to conformational changes.