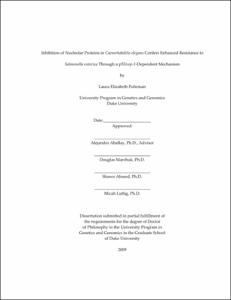 To date, the only known negative regulators of innate immunity in <italic>C. elegans</italic> are dependent on the FOXO transcription factor, DAF-16 and regulate lifespan in addition to immunity. Therefore, we focused our efforts on identifying additional negative regulators of innate immunity by screening for mutants which display a reduced accumulation of <italic>S. enterica</italic> at a time point when wild-type nematodes are packed with bacteria. In a genetic screen for <italic>C. elegans</italic> mutants which display reduced accumulation of <italic>S. enterica</italic>/GFP, we identified a mutation in <italic>nol-6</italic>, a nucleolar protein containing a nucleolar RNA-associated protein (Nrap) domain which is conserved across eukaryotic organisms. <italic>nol-6</italic> is implicated in ribosomal RNA (rRNA) processing during the early stages of ribosome biogenesis. We show that knockdown of <italic>nol-6</italic> as well as other nucleolar genes leads to a reduction of pathogen accumulation and enhanced resistance to killing by pathogen. In addition, we demonstrate that enhanced resistance is dependent on p53/<italic>cep-1</italic>. Furthermore, microarray analysis shows a significant enrichment of upregulated genes that have previously been shown to be dependent on p53/<italic>cep-1</italic> for induction following ultraviolet radiation. These results represent the first evidence that <italic>C. elegans</italic> innate immunity is regulated by the nucleolus through a p53/<italic>cep-1</italic>-dependent mechanism.