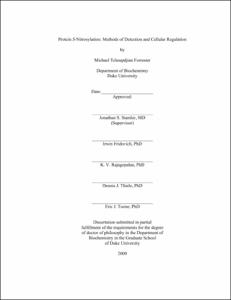 Protein S-nitrosylation--the post-translational modification of cysteine thiols into S-nitrosothiols--is a principle mechanism of nitric oxide-based signaling. Studies have demonstrated myriad roles for S-nitrosylation in organisms from bacteria to humans, and recent efforts have greatly advanced our scientific understanding of how this redox-based modification is dynamically regulated during physiological and pathophysiological conditions. This doctoral thesis is focused on the 1) analysis of existing methodologies for the detection of protein S-nitrosylation; 2) development of new methodologies for the detection of protein S-nitrosylation and 3) discovery of novel enzymatic mechanisms by which S-nitrosylation is regulated in vivo. The specificity of the biotin switch technique, the mainstay assay for detecting S-nitrosylation, was rigorously assessed and validated. This study was paramount as a response to several published (though poorly grounded) criticisms of the biotin switch technique. Separately presented is a unique resin-based assay for proteomic analysis of S-nitrosylation (dubbed "SNO-RAC"), which is combined with mass spectrometric tools to identify sites of S-nitrosylation in several cellular models (e.g. E. coli, mammalian cells). Other data presented herein demonstrate that the thioredoxin system is regulated, in a negative feedback manner, to control S-nitrosylation and prevent nitrosative stress. This system involves nitric oxide-dependent suppression of an established thioredoxin inhibitor, the thioredoxin interacting protein (Txnip). This, in turn, affords thioredoxin an optimal environment to drive protein denitrosylation and prevent nitrosative stress secondary to endogenous nitric oxide production.