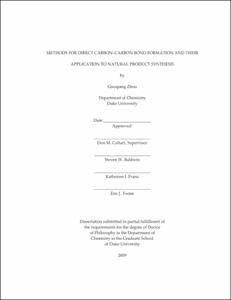 Direct carbon&mdashcarbon bond formation via soft enolization and in situ enolate formation provides a straightforward approach to certain key transformations of synthetic organic chemistry. Reactions are generally operationally simple and proceed under mild conditions using untreated, reagent&ndashgrade solvent open to the air. Using this direct approach as a basis, we have developed methods for the synthesis of β&ndashhydroxy thioesters, β&ndashketo thioesters, and 1,3&ndashdiketones, which are key intermediates for the synthesis of natural products, pharmaceuticals, and other biologically relevant compounds. In particular, we describe: 1) a direct aldol addition of simple thioesters, 2) a direct synthesis of 1,3&ndashdiketone compounds, 3) a direct crossed&ndashClaisen reaction, and 4) an <italic>anti<italic>&ndashselective four&ndashcomponent direct aldol cascade reaction.

Progress toward the total synthesis of apratoxin D is described. The key steps of the synthesis involve the asymmetric alkylation via chiral <italic>N<italic>&ndashamino cyclic carbamate (ACC) hydrazones, a new technology recently developed in our group.