"The Door that Cannot be Closed": Citizens bidoon Citizenship in the United Arab Emirates 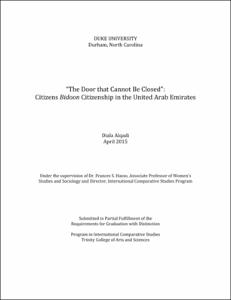 View / Download
961.4 Kb
Date
Author
Alqadi, Diala
Advisor
Hasso, Frances Susan
Repository Usage Stats
605
views
7,720
downloads
Abstract
This project traces how and why people "without" [bidoon] citizenship emerged as a problem in the United Arab Emirates in the 2000s. It examines the reasons the government refuses to grant them citizenship despite regular complaints that citizens are "outnumbered" by migrants. Chapter 2 draws on archived British documents and other sources to show the new forms of sovereignty over territory and population that emerged as colonial interests shifted from control of waterways to control of land and fossil fuels. It analyzes the shifting power dynamics between British colonial powers and local rulers, and the legal developments that preceded the formation of the federation in 1971. The historical approach demonstrates the fluidity in power relations and the later tensions produced by multiple jurisdictions that were in fact encouraged by British colonial rule. Chapter 3 draws on scholarship, government sources, news, laws and decrees to show how the bidoons were casualties of a larger population project related to consolidating "federal" rule. It considers citizenship-related UAE laws and procedures between 1971 and 2011 and discusses turning points and major sources of demographic and political tension and the ways these have produced the problem of the bidoon in the UAE. The chapter also discusses state “security” discourse and cultural anxieties felt by Emirati citizens in relation to non-citizens and migrants and how bidoons articulate their frustrations and make claims for citizenship online. Chapter 4, which relies on blogs and news outlets, focuses on the dominant explanatory accounts for why bidoons, who speak the regional Arabic dialect and have lived there for generations, are refused citizenship. Ultimately, these accounts are insufficient as explanations for why the bidoon problem remains.
Description
Honors thesis, awarded highest honors
Type
Honors thesis
Department
International Comparative Studies
Subject
uae, bidoon, citizenship, gulf, emirates, arab
uae, bidoon, citizenship, gulf, emirates, arab
Permalink
https://hdl.handle.net/10161/11707
Citation
Alqadi, Diala (2016). "The Door that Cannot be Closed": Citizens bidoon Citizenship in the United Arab Emirates. Honors thesis, Duke University. Retrieved from https://hdl.handle.net/10161/11707.
Collections
More Info
Show full item record