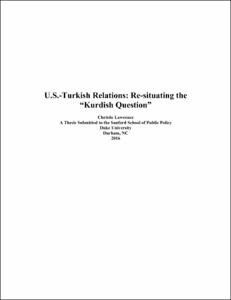 Files
Main Thesis
1.6 Mb
Executive Summary
92.9 Kb
Date
Author
Lawrence, Christie
Advisors
Jentleson, Bruce W
Rogerson, Kenneth S.
Repository Usage Stats
350
views
2,042
downloads
Abstract
Historically many American policymakers have not prioritized the status of Turkey’s Kurds in bilateral relations, despite the significant political, cultural, and security implications of the “Kurdish Question”. The events over the past two years, including the devolution of the 2013 cease-fire between the Kurdistan Worker’s Party (PKK) and the Turkish state, the concurrent increase in importance of the Kurds and Turkey in the fight against the Islamic State in Iraq and the Levant (ISIL), and the Parliamentary elections in June and November 2015 have re-situated and further internationalized the “Kurdish Question”. Although Turkey’s July 2015 opening of the Incirilik air base to the anti-ISIL coalition was celebrated, Turkey’s air strikes against ISIL were matched with Turkish air raids of PKK targets in Iraq, urges for the anti-ISIL coalition to distance itself from the PKK-affiliated Democratic Union Party (PYD), and pressure on the coalition to create a buffer zone that strategically divides Kurdish cantons in Syria. These developments elucidate a concerning dilemma: the United States must find a way to balance its new cooperation with a strategic ethnic minority against an important military and security-focused relationship with the geostrategic NATO ally. Through a historical analysis of U.S.-Turkish relations regarding the Kurds, examination of U.S. national interests, and 24 elite interviews, this paper investigates the Unites States’ prioritization of security over human rights regarding its relationship with Turkey. This thesis concludes with policy recommendations to the United States, recommending the United States prioritizes the “Kurdish Question” and holds Turkey accountable for its actions in order to achieve peace, security, and stability both in the fight against ISIL and in the region.
Type
Honors thesis
Department
Public Policy Studies
Subject
Turkey
Kurds
PKK
Kurdistan Worker's Party
human rights
U.S.-Turkish relations
Permalink
https://hdl.handle.net/10161/11823
Citation
Lawrence, Christie (2016). U.S.-Turkish Relations: Re-situating the “Kurdish Question”. Honors thesis, Duke University. Retrieved from https://hdl.handle.net/10161/11823.
Collections
More Info
Show full item record