A Comparative Study of the Chinese Trickster Hero Sun Wukong 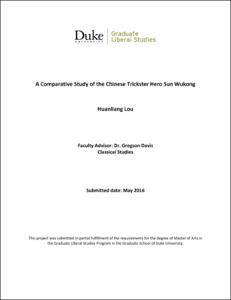 View / Download
786.9 Kb
Date
Author
Lou, Huanliang
Advisor
Davis, Dr. Gregson
Repository Usage Stats
1,582
views
13,386
downloads
Abstract
Sun Wukong is a fictional hero from the Chinese classic The Journey to the West. As a well-known trickster, Wukong has a lot of similarities with several other tricksters around the world. In order to analyze him, I try to explain both his similarities with, and differences from, other tricksters, especially in the Ancient Greek folklore and myth traditions. The first half of the paper focuses on the general characteristics of tricksters. As a very distinctive group in global mythology, tricksters have particular features. The definition and symbolization of tricksters are illustrated by comparing Wukong and major Greek tricksters, such as Hermes, Odysseus, and Prometheus. The second part of the paper is concentrated on the heroic features of tricksters and the cultural values reflected in the Wukong narrative. How tricksters become cultural heroes is the main theme of Chapter Three. I explain their evolution by elaborating on the change in their nature mentioned in the second chapter. The fourth chapter illustrates the reason why Wukong is an East Asian cultural hero.I explore the personalities of Wukong and see how they fit the dominant philosophy and cultural values of the region. The last chapter briefly shows how popular Wukong is in Chinese and the entire East Asian culture.
Type
Master's thesis
Department
Graduate Liberal Studies
Subject
trickster
cultural hero
Permalink
https://hdl.handle.net/10161/11824
Citation
Lou, Huanliang (2016). A Comparative Study of the Chinese Trickster Hero Sun Wukong. Master's thesis, Duke University. Retrieved from https://hdl.handle.net/10161/11824.
Collections
More Info
Show full item record