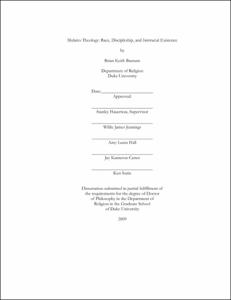 To exist racially "in-between," has been characterized as a tragic existence in the modern world. The loneliness and isolation of these lives have given rise to the term the "tragic mulatto." The dissertation Mulatto Theology: Race, Discipleship, and Interracial Existence theologically interprets mulatto lives making visible and interrogating the wider reality of racialized lives in modernity. The mulatto's body is significant in that it discloses what is masked in modern (and particularly white) identities.

In examining the formation and performance of mulatto bodies this dissertation suggests these bodies are theologically important for modern Christians and theological reflection in particular. Namely, the mulatto's body becomes the site for re-imagining Christian life as a life lived "in-between." The primary locus of this re-imagination is the body of Christ.

A re-examination of theological reflection and Scripture regarding his person and work display his character as mulatto, or the God-man. But not only is his identity mulatto, but his person also describes the nature of his work, his re-creation of humanity. So

understood Christian bodies can be construed as "interracial" bodies -- bodies of flesh and Spirit that disrupt modern formations of race. The Christian body points to a communal reality where hybridity is no longer tragic, but rather constitutive of Christian discipleship. This new, hybrid and "impure" way of existing witnesses to God's redemptive work in the world.