The Role of Syrian Refugees in The Sharing Economy and Technology Sector in Germany: A Neoliberal Approach to Integration and Empowerment 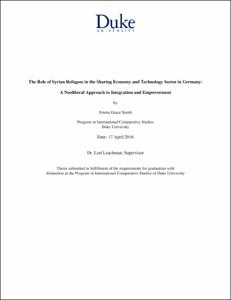 View / Download
7.6 Mb
Date
Author
Smith, Emma
Advisor
Leachman, Lori
Repository Usage Stats
1,009
views
9,576
downloads
Abstract
From January through December of 2015, Germany accepted nearly one million refugees. Though arriving with diverse skillsets and past experiences, approximately half of these refugees share one thing in common: they are Syrian. As the influx of Syrians in Germany represented a larger trend of what was happening throughout Europe during this time, it seemed fitting to study their case for this thesis. This study sets out to explore innovations that give refugees agency to contribute to their own advancement and integration. Over the course of three months, twelve refugees were interviewed and fifteen were surveyed to produce the results for this work. The work presented here suggests that the existing dependency-creating aid structure must be changed to give agency to refugees. Such changes improve integration of refugees and enable them to contribute in a meaningful way to their host communities. The three chapters in this work will narrow in on this topic. Chapter One will go on to provide further background and context about Syrian refugees, German policies and practices as they relate to integration, and the field of social entrepreneurship. Chapter Two and Three argue respectively that the sharing economy and the technology sector can be used to help Syrian refugees integrate into their communities in Germany. Comprehensively, this research contributes to a growing field of work around how refugees can serve as economic boon instead of burden.
Type
Honors thesis
Department
International Comparative Studies
Subject
refugees
economics
human rights
Permalink
https://hdl.handle.net/10161/11864
Citation
Smith, Emma (2016). The Role of Syrian Refugees in The Sharing Economy and Technology Sector in Germany: A Neoliberal Approach to Integration and Empowerment. Honors thesis, Duke University. Retrieved from https://hdl.handle.net/10161/11864.
Collections
More Info
Show full item record