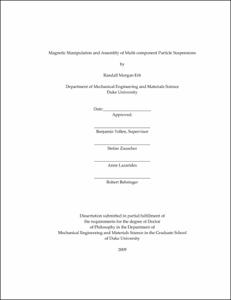 This thesis will investigate previously unexplored concepts in magnetic manipulation including controlling the assembly of magnetic and nonmagnetic particles either in bulk fluid or near a substrate. Both uniform glass interfaces and substrates with magnetic microstructures are considered. The main goal of this work is to discuss new strategies for implementing magnetic assembly systems that are capable of exquisitely controlling the positions and orientations of single-component as well as multi-component particle suspensions, including both magnetic and non-magnetic particles. This work primarily focuses on controlling spherical particles; however, there are also several demonstrations of controlling anisotropically shaped particles, such as microrods and Janus colloids.

Throughout this work, both conventional magnetophoresis and inverse magnetophoresis techniques were employed, the latter relying on ferrofluid, i.e. a suspension of magnetic nanoparticles in a nonmagnetic carrier fluid, which provides a strong magnetic permeability in the surrounding fluid in order to manipulate effectively non-magnetic materials. In each system it was found that the dimensionless ratio between magnetic energy and thermal energy could be successfully used to describe the degree of control over the positions and orientations of the particles. One general conclusion drawn from this work is that the ferrofluid can be modeled with a bulk effective permeability for length scales on the order of 100 nm. This greatly reduces modeling requirements since ferrofluid is a complex collection of discrete nanoparticles, and not a homogenous fluid. It was discovered that the effective magnetic permeability was often much larger than expected, and this effect was attributed to particle aggregation which is inherent in these systems. In nearly all cases, these interactions caused the ferrofluid to behave as though the nanoparticles were clustered with an effective diameter about twice the real diameter.

The principle purpose of this thesis is to present novel systems which offer the ability to manipulate and orient multi-component spherical or anisotropic particle suspensions near surfaces or in the bulk fluid. First, a novel chip-based technique for transport and separation of magnetic microparticles is discussed. Then, the manipulation of magnetic nanoparticles, for which Brownian diffusion is a significant factor, is explored and modeled. Parallel systems of nonmagnetic particles suspended in ferrofluid are also considered in the context of forming steady state concentration gradients. Next, systems of particles interacting with planar glass interfaces are analyzed, modeled, and a novel application is developed to study the interactions between antigen-antibody pairs by using the self-repulsion of non-magnetic beads away from a ferrofluid/glass interface. This thesis also focuses on studying the ability to manipulate particles in the bulk fluid. First, simple dipole-dipole aggregation phenomenon is studied in suspensions of both nonmagnetic polystyrene particles and endothelial cells. For the sizes of particles considered in these studies, currently accepted diffusion limited aggregation models could not explain the observed behavior, and a new theory was proposed. Next, this thesis analyzed the interactions that exist in multi-component magnetic and nonmagnetic particle suspensions, which led to a variety of novel and interesting colloidal assemblies. This thesis finally discusses the manipulation of anisotropic particles, namely, the ability to control the orientation of particles including both aligning nonmagnetic rods in ferrofluid as well as achieving near-holonomic control of Janus particles with optomagnetic traps. General conclusions of the viability of these techniques are outlined and future studies are proposed in the final chapter.