Shackled in the Garden: Ecology and Race in American Plantation Cultures 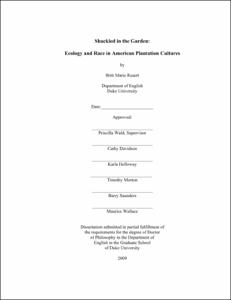 Even in our contemporary moment, the word plantation evokes a distinctly Southern and rural image in which slavery is well hidden within an idyllic botanical scene. And yet, from the very beginning of industrialization in the United States, plantation agriculture and enslavement were thoroughly embedded in the circuits of Northern capital and urbanization. "Shackled in the Garden" begins from the premise that the plantation is not an archaic institution that withered away in the nineteenth century, but rather is an enduring site of production and reproduction in the U.S. and throughout the Global South. Historically, the plantation has played a central role in organizing racialized bodies, technologies and environments in the South. In the wake of widespread ecological and social disaster across global Southern geographies, I insist that it behooves us to take another view of the plantation.

"Shackled in the Garden" rethinks the plantation as an ecological space: a space of dynamic relations in which racialized bodies and technologies are aggregated and disaggregated by a powerfully tropical environment. In the midst of ongoing crises over the sustainability of the plantation complex in the mid-eighteenth century, the plantation metamorphosized from an idyllic geography of botanical bounty and pure soil to a "toxic paradise": a tainted space that enclosed usable bodies and usable lands to be put in the service of increasingly experimental purposes. This peculiar conjoining of racialized subjects and the environment transformed the plantation into a privileged site for investigations into natural history, which sought to catalog and organize the natural world. Understandings of natural history as an innocent and feminine pursuit based on non-intervention and simple observation of the environment hid rampant experimentation on all kinds of "specimen" on the plantation including botanical species, agricultural crops, livestock, and enslaved persons.

While emergent biological models in the mid-nineteenth century began to understand race and identity as being rooted in the body, climatic or environmental determinations of identity continued to hold rhetorical power. Biology may have achieved a hegemonic position with the increasingly legitimated theories of Darwinian evolution, but natural history did not wither into oblivion. While individuation, mechanization, and biology flourished in the North, the plantation South continued to be figured as a natural ecology, a geography where identity refused its disentanglement from a dangerously miasmic and tropical environment. This project emerges out of both literary studies and science studies. Moving from James Grainger and Thomas Jefferson through Thomas Wentworth Higginson to Booker T. Washington, I explore how a literary imaginary of the plantation pastoral, which continued to represent the plantation as an unenclosed, pre-industrial and green geography in the face of extensive industrialization and environmental degradation, contributed to an understanding of the plantation as a "natural" space of scientific experimentation. The second half of the project considers a perhaps surprising genealogy of plantation fiction from authors such as Martin Delany and Jean Toomer who defamiliarized pastoral naturalizations of plantation space at the same time as they played on the heterotopic spatiality of the plantation to imagine a different, more global plantation South.