Strange Chains: How Language Keeps Non-English Speakers Out of the Justice System – Or Locks Them In 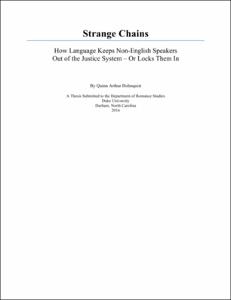 View / Download
3.7 Mb
Date
Author
Holmquist, Quinn
Advisor
Dubois, Laurent M
Repository Usage Stats
213
views
173
downloads
Abstract
Until 2010, North Carolina’s courts, which promise “equal justice to all,” had no resources to accommodate the needs of all non-English speakers. They had to sign English-only forms they could not read and were expected find interpreters they could not pay for to explain a crime of which they had never been informed. Over the past five years, this incomprehensible state of language access has improved, thanks to the cooperation of judges, lawyers, advocacy groups, and the courts. In this project, I explore language access in North Carolina courts. I spent seventy-five hours observing in two North Carolina courthouses, one small and rural and one large and urban. During my time, I met and interviewed 13 non-English speakers whose stories directed my research and whose narratives I weave throughout this project. To understand the context of their experiences, I interviewed over 25 language access stakeholders, including legal scholars, lawyers, an attorney with the Department of Justice, and the interpreters themselves. I found that the ideal of universal interpreter provision has not yet translated into reality. In fact, 10 of my 13 informants were not provided an interpreter when they needed one. In Chapter I, I identify the two characteristics of the courtroom – scarcity and inefficiency – which bar non-English speakers particularly from access. In April 2015, the Court published its own solution to courtroom scarcity and inefficiency: the North Carolina Standards for Language Access. These Standards go further than any previous legislation in North Carolina to provide qualified, free interpreters for non-English speakers. Since the Standards are so new, no systematic analysis has been conducted on their application, until now. In Chapter II, I undertake the very first study of the Standards. I develop three shifts in the Standards’ application which, if applied, will address all 13 of my informants’ inaccess. As often happens with new research, I began seeking to understand one issue and ended exploring another. As my interaction with my informants spilled out of the courtroom, I began to realized that the most significant inaccess they faced occurred outside the courtroom. Even the best interpreter can only interpret when the non-English speaker is in the courtroom. But less than 5% of cases actually reach the courtroom trial. My informants ran into walls with pre- and post-court paperwork, at the Clerk’s office, and in lawyer-client conference rooms. Most legal work is done in these “in-between” spaces. These de-regulated, liminal settings are where nearly all litigation happens, but where research and service provision are scant. It is in these “in-between” spaces that I conducted the second part of my fieldwork, and from which Chapter III is inspired. Now that the Standards have made free interpreters a foregone conclusion (at least in theory), it is in these in-between spaces that scholars and policy-makers must re-focus if they are committed to holistic, meaningful access for foreign language speakers. With this analysis of “access in-between,” I take up the exhortation of Judge Smith, the primary author of the Standards, to “constantly…reexamine the goals” of language access in North Carolina. I hope that my analysis will break the tough ground of policy and academic inertia into new soil of legal access research and invite further examination. I hope to begin a conversation on language access that thinks broader than courtroom and deeper than interpreter quality.
Type
Honors thesis
Department
Romance Studies
Subject
justice system
LEP individual
microanthropology
Haitian Creole
Durham
Title VI
Permalink
https://hdl.handle.net/10161/11999
Citation
Holmquist, Quinn (2016). Strange Chains: How Language Keeps Non-English Speakers Out of the Justice System – Or Locks Them In. Honors thesis, Duke University. Retrieved from https://hdl.handle.net/10161/11999.
Collections
More Info
Show full item record