Biochemical and Structural Studies on PrfA, the Transcriptional Regulator of Virulence in Listeria monocytogenes 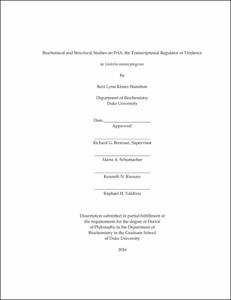 Listeria monocytogenes is a gram-positive soil saprophytic bacterium that is capable of causing fatal infection in humans. The main virulence regulator PrfA, a member of the Crp/FNR family of transcriptional regulators, activates the expression of essential proteins required for host cell invasion and cell-to-cell spread. The mechanism of PrfA activation and the identity of its small molecule coactivator have remained a mystery for more than 20 years, but it is hypothesized that PrfA shares mechanistic similarity to the E. coli cAMP binding protein, Crp. Crp activates gene expression by binding cAMP, increasing the DNA binding affinity of the protein and causing a significant DNA bend that facilitates RNA polymerase binding and downstream gene activation. Our data suggests PrfA activates virulence protein expression through a mechanism distinct from the canonical Crp activation mechanism that involves a combination of cysteine residue reduction and glutathione (GSH) binding.

Listeria lacking glutathione synthase (ΔgshF) is avirulent in mice; however virulence is rescued when the bacterium expresses the constitutively active PrfA mutant G145S. Interestingly, Listeria expressing a PrfA mutant in which its four cysteines are mutated to alanine (Quad PrfA), demonstrate a 30-fold decrease in virulence. The Quad and ΔgshF double mutant strains are avirulent. DNA-binding affinity, measured through fluorescence polarization assays, indicate reduction of the cysteine side chains is sufficient to allow PrfA to binds its physiological promoters Phly and PactA with low nanomolar affinity. Oxidized PrfA binds the promoters poorly.

Unexpectedly, Quad also binds promoter DNA with nanomolar affinity, suggesting that the cysteines play a role in transcription efficiency in addition to DNA binding. Both PrfA and Quad bind GSH at physiologically relevant and comparable affinities, however GSH did not affect DNA binding in either case. Thermal denaturation assays suggest that Quad and wild-type PrfA differ structurally upon binding GSH, which supports the in vivo difference in infection between the regulator and its mutant.

Structures of PrfA in complex with cognate DNA, determined through X-ray crystallography, further support the disparity between PrfA and Crp activation mechanisms as two structures of reduced PrfA bound to Phly (PrfA-Phly30 and PrfA-Phly24) suggest the DNA adopts a less bent DNA conformation when compared to Crp-cAMP- DNA. The structure of Quad-Phly30 confirms the DNA-binding data as the protein-DNA complex adopts the same overall conformation as PrfA-Phly.

From these results, we hypothesize a two-step activation mechanism wherein PrfA, oxidized upon cell entry and unable to bind DNA, is reduced upon its intracellular release and binds DNA, causing a slight bend in the promoter and small increase in transcription of PrfA-regulated genes. The structures of PrfA-Phly30 and PrfA-Phly24 likely visualize this intermediate complex. Increasing concentrations of GSH shift the protein to a (PrfA-GSH)-DNA complex which is fully active transcriptionally and is hypothesized to resemble closely the transcriptionally active structure of the cAMP-(Crp)-DNA complex. Thermal denaturation results suggest Quad PrfA is deficient in this second step, which explains the decrease in virulence and implicates the cysteine residues as critical for transcription efficiency. Further structural and biochemical studies are on-going to clarify this mechanism of activation.