Spaces of Order: An African Poetics of Space 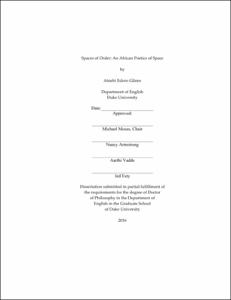 “Spaces of Order” argues that the African novel should be studied as a revolutionary form characterized by aesthetic innovations that are not comprehensible in terms of the novel’s European archive of forms. It does this by mapping an African spatial order that undermines the spatial problematic at the formal and ideological core of the novel—the split between a private, subjective interior, and an abstract, impersonal outside. The project opens with an examination of spatial fragmentation as figured in the “endless forest” of Amos Tutuola’s The Palmwine Drinkard (1952). The second chapter studies Chinua Achebe’s Things Fall Apart (1958) as a fictional world built around a peculiar category of space, the “evil forest,” which constitutes an African principle of order and modality of power. Chapter three returns to Tutuola via Ben Okri’s The Famished Road (1991) and shows how the dispersal of fragmentary spaces of exclusion and terror within the colonial African city helps us conceive of political imaginaries outside the nation and other forms of liberal political communities. The fourth chapter shows Nnedi Okorafor—in her 2014 science-fiction novel Lagoon—rewriting Things Fall Apart as an alien-encounter narrative in which Africa is center-stage of a planetary, multi-species drama. Spaces of Order is a study of the African novel as a new logic of world making altogether.