Plato's Cretan Colony: Theology and Religion in the Political Philosophy of the Laws 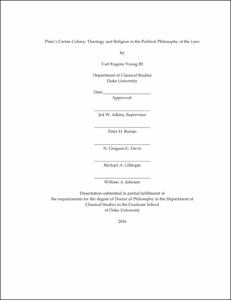 The Laws is generally regarded as Plato’s attempt to engage with the practical realities of political life, as opposed to the more idealistic, or utopian, vision of the Republic. Yet modern scholars have often felt disquieted at the central role of religion in the Laws’ second-best city and regime. There are essentially the two dominant interpretations on offer today: either religion supports a repressive theocracy, which controls every aspect of the citizens’ lives to such an extent that even philosophy itself is discouraged, or religion is an example of the kind of noble lie, which the philosopher must deceive the citizens into believing—viz., that a god, not a man, is the author of the regime’s laws. I argue that neither of these interpretations do justice to the dialogue’s intricately dramatic structure, and therefore to Plato’s treatment of civil religion. What I propose is a third position in which Plato both takes seriously the social and political utility of religion, and views theology as a legitimate, and even necessary, subject of philosophical inquiry without going so far as to advocate theocracy as the second best form of regime.

I conclude that a proper focus on the dialogue form, combined with a careful historical analysis of Plato’s use of social and political institutions, reveals an innovative yet traditional form of civil religion, purified of the harmful influence of the poets, based on the authority of the oracle at Delphi, and grounded on a philosophical conception of god as the eternal source of order, wisdom, and all that is good. Through a union of traditional Delphic theology and Platonic natural theology, Plato gives the city of the Laws a common cult acceptable to philosopher and non-philosopher alike, and thus, not only bridges the gap between religion and philosophy, but also creates a sense of community, political identity, and social harmony—the prerequisites for political order and stability. The political theology of the Laws, therefore, provides a rational defense of the rule of law (νόμος) re-conceived as the application of divine Reason (νοῦς) to human affairs.