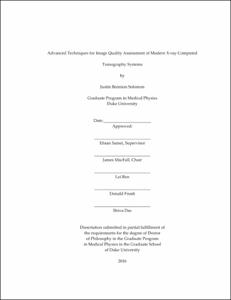 X-ray computed tomography (CT) imaging constitutes one of the most widely used diagnostic tools in radiology today with nearly 85 million CT examinations performed in the U.S in 2011. CT imparts a relatively high amount of radiation dose to the patient compared to other x-ray imaging modalities and as a result of this fact, coupled with its popularity, CT is currently the single largest source of medical radiation exposure to the U.S. population. For this reason, there is a critical need to optimize CT examinations such that the dose is minimized while the quality of the CT images is not degraded. This optimization can be difficult to achieve due to the relationship between dose and image quality. All things being held equal, reducing the dose degrades image quality and can impact the diagnostic value of the CT examination.

A recent push from the medical and scientific community towards using lower doses has spawned new dose reduction technologies such as automatic exposure control (i.e., tube current modulation) and iterative reconstruction algorithms. In theory, these technologies could allow for scanning at reduced doses while maintaining the image quality of the exam at an acceptable level. Therefore, there is a scientific need to establish the dose reduction potential of these new technologies in an objective and rigorous manner. Establishing these dose reduction potentials requires precise and clinically relevant metrics of CT image quality, as well as practical and efficient methodologies to measure such metrics on real CT systems. The currently established methodologies for assessing CT image quality are not appropriate to assess modern CT scanners that have implemented those aforementioned dose reduction technologies.

The work in this dissertation used the “task-based” definition of image quality. That is, image quality was broadly defined as the effectiveness by which an image can be used for its intended task. Under this definition, any assessment of image quality requires three components: (1) A well defined imaging task (e.g., detection of subtle lesions), (2) an “observer” to perform the task (e.g., a radiologists or a detection algorithm), and (3) a way to measure the observer’s performance in completing the task at hand (e.g., detection sensitivity/specificity).

Based on those results, the dose reduction potential of ADMIRE was further assessed specifically for the task of detecting small (<=6 mm) low-contrast (<=20 HU) lesions. A new low-contrast detectability phantom (with uniform background) was designed and fabricated using a multi-material 3D printer. The phantom was imaged at multiple dose levels and images were reconstructed with FBP and ADMIRE. Human perception experiments were performed to measure the detection accuracy from FBP and ADMIRE images. It was found that ADMIRE had equivalent performance to FBP at 56% less dose.

Using the same image data as the previous study, a number of different mathematical observer models were implemented to assess which models would result in image quality metrics that best correlated with human detection performance. The models included naïve simple metrics of image quality such as contrast-to-noise ratio (CNR) and more sophisticated observer models such as the non-prewhitening matched filter observer model family and the channelized Hotelling observer model family. It was found that non-prewhitening matched filter observers and the channelized Hotelling observers both correlated strongly with human performance. Conversely, CNR was found to not correlate strongly with human performance, especially when comparing different reconstruction algorithms.

The uniform background phantoms used in the previous studies provided a good first-order approximation of image quality. However, due to their simplicity and due to the complexity of iterative reconstruction algorithms, it is possible that such phantoms are not fully adequate to assess the clinical impact of iterative algorithms because patient images obviously do not have smooth uniform backgrounds. To test this hypothesis, two textured phantoms (classified as gross texture and fine texture) and a uniform phantom of similar size were built and imaged on a SOMATOM Flash scanner (Siemens Healthcare). Images were reconstructed using FBP and a Sinogram Affirmed Iterative Reconstruction (SAFIRE). Using an image subtraction technique, quantum noise was measured in all images of each phantom. It was found that in FBP, the noise was independent of the background (textured vs uniform). However, for SAFIRE, noise increased by up to 44% in the textured phantoms compared to the uniform phantom. As a result, the noise reduction from SAFIRE was found to be up to 66% in the uniform phantom but as low as 29% in the textured phantoms. Based on this result, it clear that further investigation was needed into to understand the impact that background texture has on image quality when iterative reconstruction algorithms are used.

To further investigate this phenomenon with more realistic textures, two anthropomorphic textured phantoms were designed to mimic lung vasculature and fatty soft tissue texture. The phantoms (along with a corresponding uniform phantom) were fabricated with a multi-material 3D printer and imaged on the SOMATOM Flash scanner. Scans were repeated a total of 50 times in order to get ensemble statistics of the noise. A novel method of estimating the noise power spectrum (NPS) from irregularly shaped ROIs was developed. It was found that SAFIRE images had highly locally non-stationary noise patterns with pixels near edges having higher noise than pixels in more uniform regions. Compared to FBP, SAFIRE images had 60% less noise on average in uniform regions for edge pixels, noise was between 20% higher and 40% lower. The noise texture (i.e., NPS) was also highly dependent on the background texture for SAFIRE. Therefore, it was concluded that quantum noise properties in the uniform phantoms are not representative of those in patients for iterative reconstruction algorithms and texture should be considered when assessing image quality of iterative algorithms.

The move beyond just assessing noise properties in textured phantoms towards assessing detectability, a series of new phantoms were designed specifically to measure low-contrast detectability in the presence of background texture. The textures used were optimized to match the texture in the liver regions actual patient CT images using a genetic algorithm. The so called “Clustured Lumpy Background” texture synthesis framework was used to generate the modeled texture. Three textured phantoms and a corresponding uniform phantom were fabricated with a multi-material 3D printer and imaged on the SOMATOM Flash scanner. Images were reconstructed with FBP and SAFIRE and analyzed using a multi-slice channelized Hotelling observer to measure detectability and the dose reduction potential of SAFIRE based on the uniform and textured phantoms. It was found that at the same dose, the improvement in detectability from SAFIRE (compared to FBP) was higher when measured in a uniform phantom compared to textured phantoms.

The final trajectory of this project aimed at developing methods to mathematically model lesions, as a means to help assess image quality directly from patient images. The mathematical modeling framework is first presented. The models describe a lesion’s morphology in terms of size, shape, contrast, and edge profile as an analytical equation. The models can be voxelized and inserted into patient images to create so-called “hybrid” images. These hybrid images can then be used to assess detectability or estimability with the advantage that the ground truth of the lesion morphology and location is known exactly. Based on this framework, a series of liver lesions, lung nodules, and kidney stones were modeled based on images of real lesions. The lesion models were virtually inserted into patient images to create a database of hybrid images to go along with the original database of real lesion images. ROI images from each database were assessed by radiologists in a blinded fashion to determine the realism of the hybrid images. It was found that the radiologists could not readily distinguish between real and virtual lesion images (area under the ROC curve was 0.55). This study provided evidence that the proposed mathematical lesion modeling framework could produce reasonably realistic lesion images.

Based on that result, two studies were conducted which demonstrated the utility of the lesion models. The first study used the modeling framework as a measurement tool to determine how dose and reconstruction algorithm affected the quantitative analysis of liver lesions, lung nodules, and renal stones in terms of their size, shape, attenuation, edge profile, and texture features. The same database of real lesion images used in the previous study was used for this study. That database contained images of the same patient at 2 dose levels (50% and 100%) along with 3 reconstruction algorithms from a GE 750HD CT system (GE Healthcare). The algorithms in question were FBP, Adaptive Statistical Iterative Reconstruction (ASiR), and Model-Based Iterative Reconstruction (MBIR). A total of 23 quantitative features were extracted from the lesions under each condition. It was found that both dose and reconstruction algorithm had a statistically significant effect on the feature measurements. In particular, radiation dose affected five, three, and four of the 23 features (related to lesion size, conspicuity, and pixel-value distribution) for liver lesions, lung nodules, and renal stones, respectively. MBIR significantly affected 9, 11, and 15 of the 23 features (including size, attenuation, and texture features) for liver lesions, lung nodules, and renal stones, respectively. Lesion texture was not significantly affected by radiation dose.

The second study demonstrating the utility of the lesion modeling framework focused on assessing detectability of very low-contrast liver lesions in abdominal imaging. Specifically, detectability was assessed as a function of dose and reconstruction algorithm. As part of a parallel clinical trial, images from 21 patients were collected at 6 dose levels per patient on a SOMATOM Flash scanner. Subtle liver lesion models (contrast = -15 HU) were inserted into the raw projection data from the patient scans. The projections were then reconstructed with FBP and SAFIRE (strength 5). Also, lesion-less images were reconstructed. Noise, contrast, CNR, and detectability index of an observer model (non-prewhitening matched filter) were assessed. It was found that SAFIRE reduced noise by 52%, reduced contrast by 12%, increased CNR by 87%. and increased detectability index by 65% compared to FBP. Further, a 2AFC human perception experiment was performed to assess the dose reduction potential of SAFIRE, which was found to be 22% compared to the standard of care dose.

In conclusion, this dissertation provides to the scientific community a series of new methodologies, phantoms, analysis techniques, and modeling tools that can be used to rigorously assess image quality from modern CT systems. Specifically, methods to properly evaluate iterative reconstruction have been developed and are expected to aid in the safe clinical implementation of dose reduction technologies.