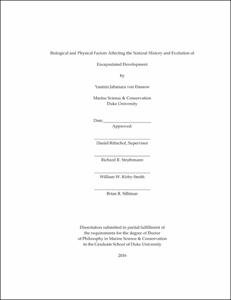 The evolution of reproductive strategies involves a complex calculus of costs and benefits to both parents and offspring. Many marine animals produce embryos packaged in tough egg capsules or gelatinous egg masses attached to benthic surfaces. While these egg structures can protect against environmental stresses, the packaging is energetically costly for parents to produce. In this series of studies, I examined a variety of ecological factors affecting the evolution of benthic development as a life history strategy. I used marine gastropods as my model system because they are incredibly diverse and abundant worldwide, and they exhibit a variety of reproductive and developmental strategies.

The first study examines predation on benthic egg masses. I investigated: 1) behavioral mechanisms of predation when embryos are targeted (rather than the whole egg mass); 2) the specific role of gelatinous matrix in predation. I hypothesized that gelatinous matrix does not facilitate predation. One study system was the sea slug Olea hansineensis, an obligate egg mass predator, feeding on the sea slug Haminoea vesicula. Olea fed intensely and efficiently on individual Haminoea embryos inside egg masses but showed no response to live embryos removed from gel, suggesting that gelatinous matrix enables predation. This may be due to mechanical support of the feeding predator by the matrix. However, Haminoea egg masses outnumber Olea by two orders of magnitude in the field, and each egg mass can contain many tens of thousands of embryos, so predation pressure on individuals is likely not strong. The second system involved the snail Nassarius vibex, a non-obligate egg mass predator, feeding on the polychaete worm Clymenella mucosa. Gel neither inhibits nor promotes embryo predation for Nassarius, but because it cannot target individual embryos inside an egg mass, its feeding is slow and inefficient, and feeding rates in the field are quite low. However, snails that compete with Nassarius for scavenged food have not been seen to eat egg masses in the field, leaving Nassarius free to exploit the resource. Overall, egg mass predation in these two systems likely benefits the predators much more than it negatively affects the prey. Thus, selection for environmentally protective aspects of egg mass production may be much stronger than selection for defense against predation.

In the second study, I examined desiccation resistance in intertidal egg masses made by Haminoea vesicula, which preferentially attaches its flat, ribbon-shaped egg masses to submerged substrata. Egg masses occasionally detach and become stranded on exposed sand at low tide. Unlike adults, the encased embryos cannot avoid desiccation by selectively moving about the habitat, and the egg mass shape has high surface-area-to-volume ratio that should make it prone to drying out. Thus, I hypothesized that the embryos would not survive stranding. I tested this by deploying individual egg masses of two age classes on exposed sand bars for the duration of low tide. After rehydration, embryos midway through development showed higher rates of survival than newly-laid embryos, though for both stages survival rates over 25% were frequently observed. Laboratory desiccation trials showed that >75% survival is possible in an egg mass that has lost 65% of its water weight, and some survival (<25%) was observed even after 83% water weight lost. Although many surviving embryos in both experiments showed damage, these data demonstrate that egg mass stranding is not necessarily fatal to embryos. They may be able to survive a far greater range of conditions than they normally encounter, compensating for their lack of ability to move. Also, desiccation tolerance of embryos may reduce pressure on parents to find optimal laying substrata.

The third study takes a big-picture approach to investigating the evolution of different developmental strategies in cone snails, the largest genus of marine invertebrates. Cone snail species hatch out of their capsules as either swimming larvae or non-dispersing forms, and their developmental mode has direct consequences for biogeographic patterns. Variability in life history strategies among taxa may be influenced by biological, environmental, or phylogenetic factors, or a combination of these. While most prior research has examined these factors singularly, my aim was to investigate the effects of a host of intrinsic, extrinsic, and historical factors on two fundamental aspects of life history: egg size and egg number. I used phylogenetic generalized least-squares regression models to examine relationships between these two egg traits and a variety of hypothesized intrinsic and extrinsic variables. Adult shell morphology and spatial variability in productivity and salinity across a species geographic range had the strongest effects on egg diameter and number of eggs per capsule. Phylogeny had no significant influence. Developmental mode in Conus appears to be influenced mostly by species-level adaptations and niche specificity rather than phylogenetic conservatism. Patterns of egg size and egg number appear to reflect energetic tradeoffs with body size and specific morphologies as well as adaptations to variable environments. Overall, this series of studies highlights the importance of organism-scale biotic and abiotic interactions in evolutionary patterns.