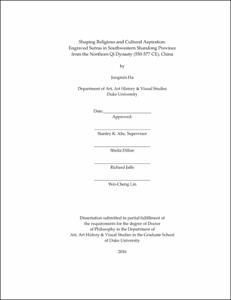 This dissertation explores how the Buddhist texts carved on the cliffs of mountains served their patrons’ religious and cultural goals. During the Northern Qi period (550-577 CE), these carved Buddhist sutra texts and Buddha names were prevalent, and were carved directly onto the surfaces of numerous mountains in southwestern Shandong Province. The special focus of this study is on the Buddhist engravings at Mt. Hongding in Dongping, and at Mt. Tie in Zoucheng. Created in approximately 553-564 CE, the carvings at Mt. Hongding stand as the terminus a quo of the history of Buddhist sutras carved into the rocks of the Shandong mountains. The Buddhist carvings at Mt. Hongding served monastic goals. The monk patrons, Seng’an Daoyi, Fahong, and others created the carvings as an integral part of their Buddhist meditation practices. The carvings at Mt. Tie paint a very different picture. At Mt. Tie, a colossal Buddhist sculpture-style carving was created in 579 CE. Sponsored by several Han Chinese patrons, the carving was designed in the form of a gigantic Chinese traditional stele. This study suggests that several Han Chinese local elites proudly displayed their Han Chinese linage by using the gigantic stele form of Buddhist text carving as a means to proclaim Han Chinese cultural and artistic magnificence. To achieve these non-religious goals, they appropriated rhetorical devices often used by the Han elite, such as the stele form, written statements about the excellence of the calligraphy used, and discourse on calligraphy connoisseurship.