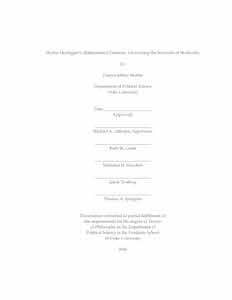 Martin Heidegger is generally regarded as one of the most significant—if also the most controversial—philosophers of the 20th century. Most scholarly engagement with Heidegger’s thought on Modernity approaches his work with a special focus on either his critique of technology, or on his more general critique of subjectivity. This dissertation project attempts to elucidate Martin Heidegger’s diagnosis of modernity, and, by extension, his thought as a whole, from the neglected standpoint of his understanding of mathematics, which he explicitly identifies as the essence of modernity.

Accordingly, our project attempts to work through the development of Modernity, as Heidegger understands it, on the basis of what we call a “mathematical dialectic.“ The basis of our analysis is that Heidegger’s understanding of Modernity, both on its own terms and in the context of his theory of history [Seinsgeschichte], is best understood in terms of the interaction between two essential, “mathematical” characteristics, namely, self-grounding and homogeneity. This project first investigates the mathematical qualities of these components of Modernity individually, and then attempts to trace the historical and philosophical development of Modernity on the basis of the interaction between these two components—an interaction that is, we argue, itself regulated by the structure of the mathematical, according to Heidegger’s understanding of the term.

The project undertaken here intends not only to serve as an interpretive, scholarly function of elucidating Heidegger’s understanding of Modernity, but also to advance the larger aim of defending the prescience, structural coherence, and relevance of Heidegger’s diagnosis of Modernity as such.