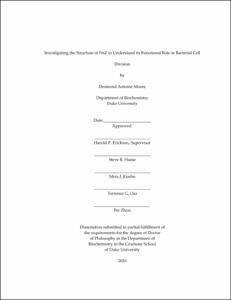 FtsZ, a bacterial tubulin homologue, is a cytoskeleton protein that plays key roles in cytokinesis of almost all prokaryotes. FtsZ assembles into protofilaments (pfs), one subunit thick, and these pfs assemble further to form a “Z ring” at the center of prokaryotic cells. The Z ring generates a constriction force on the inner membrane, and also serves as a scaffold to recruit cell-wall remodeling proteins for complete cell division in vivo. FtsZ can be subdivided into 3 main functional regions: globular domain, C terminal (Ct) linker, and Ct peptide. The globular domain binds GTP to assembles the pfs. The extreme Ct peptide binds membrane proteins to allow cytoplasmic FtsZ to function at the inner membrane. The Ct linker connects the globular domain and Ct peptide. In the present studies, we used genetic and structural approaches to investigate the function of Escherichia coli (E. coli) FtsZ. We sought to examine three questions: (1) Are lateral bonds between pfs essential for the Z ring? (2) Can we improve direct visualization of FtsZ in vivo by engineering an FtsZ-FP fusion that can function as the sole source of FtsZ for cell division? (3) Is the divergent Ct linker of FtsZ an intrinsically disordered peptide (IDP)?

One model of the Z ring proposes that pfs associate via lateral bonds to form ribbons; however, lateral bonds are still only hypothetical. To explore potential lateral bonding sites, we probed the surface of E. coli FtsZ by inserting either small peptides or whole FPs. Of the four lateral surfaces on FtsZ pfs, we obtained inserts on the front and back surfaces that were functional for cell division. We concluded that these faces are not sites of essential interactions. Inserts at two sites, G124 and R174 located on the left and right surfaces, completely blocked function, and were identified as possible sites for essential lateral interactions. Another goal was to find a location within FtsZ that supported fusion of FP reporter proteins, while allowing the FtsZ-FP to function as the sole source of FtsZ. We discovered one internal site, G55-Q56, where several different FPs could be inserted without impairing function. These FtsZ-FPs may provide advances for imaging Z-ring structure by super-resolution techniques.

The Ct linker is the most divergent region of FtsZ in both sequence and length. In E. coli FtsZ the Ct linker is 50 amino acids (aa), but for other FtsZ it can be as short as 37 aa or as long as 250 aa. The Ct linker has been hypothesized to be an IDP. In the present study, circular dichroism confirmed that isolated Ct linkers of E. coli (50 aa) and C. crescentus (175 aa) are IDPs. Limited trypsin proteolysis followed by mass spectrometry (LC-MS/MS) confirmed Ct linkers of E. coli (50 aa) and B. subtilis (47 aa) as IDPs even when still attached to the globular domain. In addition, we made chimeras, swapping the E. coli Ct linker for other peptides and proteins. Most chimeras allowed for normal cell division in E. coli, suggesting that IDPs with a length of 43 to 95 aa are tolerated, sequence has little importance, and electrostatic charge is unimportant. Several chimeras were purified to confirm the effect they had on pf assembly. We concluded that the Ct linker functions as a flexible tether allowing for force to be transferred from the FtsZ pf to the membrane to constrict the septum for division.