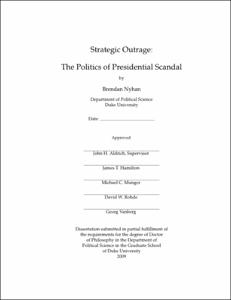 In this dissertation, I take a new approach to presidential scandal, which is frequently attributed to evidence of misbehavior. I argue instead that scandal is a socially constructed <italic>perception</italic> of misbehavior which opposition elites help create. I formalize this argument by developing a model of presidential scandal, which predicts that allegations of scandal by opposition legislators can influence the occurrence of scandal within some intermediate range of allegation scandalousness and credibility. I derive two comparative statics showing that the incidence of scandal should increase as the transaction costs of allegations decrease and as the critical mass of opposition legislators required to create a scandal decreases.

I then test the predictions of the model using monthly data from elite news reports for 1977–2006. I operationalized the critical mass comparative static using presidential approval among opposition party identifiers—a useful index of a polarized political climate. I find that the president is more vulnerable to the onset of scandal when his levels of opposition approval are relatively low. Conversely, when the president is relatively popular with opposition identifiers (during “honeymoons,” foreign policy crises, and wars), scandals occur much less frequently. In addition, scandals appear to have become more common over time, which could be the result of increased party polarization. Finally, I show that the underlying hazard of scandal was greater for second-term presidents than for first-term presidents.

Clearly, however, scandals vary widely in their size and significance. As such, I also create a dependent variable measuring the total quarterly volume of presidential scandal coverage in the <italic>Washington Post</italic>, which should capture the aggregate severity of scandals in a given time period. I show that lagged presidential approval among opposition identifiers is negatively associated with this measure. By contrast, more scandal coverage is published during presidents' second term in office and during election years.

Journalists and scholars frequently assert that divided government leads to a greater incidence of presidential scandal, but little systematic evidence exists to support these claims. An investigation reveals that divided government suffers from several important inferential problems, including a lack of comparable counterfactual data.. After addressing these issues, I estimate treatment effects for divided government and opposition control of Congress on both high-profile investigations of the president and scandal coverage, but none reach conventional levels of statistical significance.

Finally, I analyze the allegation data as a series of social networks. I present a new approach to analyze clustering in these data, which helps us to characterize patterns in allegations and member behavior. My analysis indicates that clustering among members—which suggests a convergence in scandal targets—is positively associated with increased scandal coverage at the Congress level. By contrast, I find that highly clustered allegations (i.e. those made by members who also made other allegations together) tend to receive less coverage than those that attract support from a broader coalition of members who would otherwise not be connected.