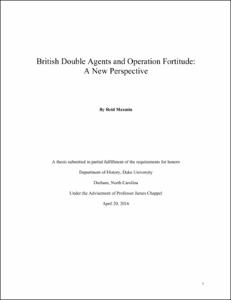 View / Download
1.4 Mb
Date
Author
Maxmin, Reid
Advisors
Krylova, Anna
Chappel, James Gregory
Repository Usage Stats
459
views
1,883
downloads
Abstract
On June 6th, 1944, Allied forces stormed the beaches of Normandy as a part of Operation Overlord, the Allied invasion of France. While they experienced pockets of stiff resistance, Allied troops sustained far fewer casualties than they had expected. The reason for this was due to Operation Fortitude, a deception mission that intended to fool Hitler about the time and location of the Allied invasion mission. The use of double agents by British Intelligence services was essential for the effective execution of Fortitude. The story of the double agents goes beyond their success during Fortitude. Double agents were initially recruited as German agents, but key agents immediately turned themselves in to British authorities upon reaching the nation. These agents decided to become involved with British Intelligence due to broader circumstances that were happening in Europe. The emergence of Fascist regimes disrupted the political landscape of Europe and led to widespread condemnation from political and social spheres. Their development as double agents became crucial to their effectiveness during Operation Fortitude. Their successful infiltration of German Intelligence allowed them to convince Hitler and German High Command that the main Allied invasion force would come at the Pas de Calais instead of Normandy. The result was that the Allies met an unprepared German defense force on D-Day and were able to advance past the beaches. The work of the double agents during Fortitude saved thousands of Allied lives and was vital to the success of Operation Overlord.
Type
Honors thesis
Department
History
Subject
Double Agent
World War II
British Intelligence
Operation Overlord
Operation Fortitude
Permalink
https://hdl.handle.net/10161/12383
Citation
Maxmin, Reid (2016). British Double Agents and Operation Fortitude: A New Perspective. Honors thesis, Duke University. Retrieved from https://hdl.handle.net/10161/12383.
Collections
More Info
Show full item record