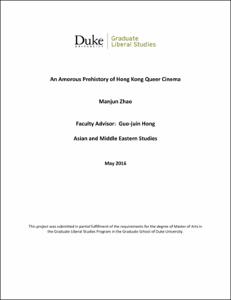 View / Download
3.6 Mb
Date
Author
Zhao, Manjun
Advisor
Hong, Guo-Juin
Repository Usage Stats
319
views
443
downloads
Abstract
Depiction of homoerotic relationships among women in commercial costumed films was a unique phenomenon in 1970s - 1980s Hong Kong cinema. What are the possible cinematic meanings of lesbian images that we can perceive in these films? How should we evaluate the exact representation of a sexuality that had been perceived as deviant in that society? In this essay, I close-read homoerotic scenes and trace through the trajectories of cultural and industrial changes enabling the emergence of two representative films: Intimate Confessions of A Chinese Courtesan (1972) and An Amorous Woman of Tang Dynasty (1984). I do this with a continuous concern for historical context in order to provide an in-depth understanding of how lesbian images are constructed in cinema.
Type
Master's thesis
Department
Graduate Liberal Studies
Subject
Hong Kong
Lesbianism
Cinema
Queer
Prehistory
Cinematic representation
Permalink
https://hdl.handle.net/10161/12386
Citation
Zhao, Manjun (2016). An Amorous Prehistory of Hong Kong Queer Cinema. Master's thesis, Duke University. Retrieved from https://hdl.handle.net/10161/12386.
Collections
More Info
Show full item record